A brewery under construction at 2000 Vine on Kansas City’s East Side comes from its founders’ taste for beer, yes, but the effort also is about transforming community — looking forward by looking back, the trio said.

“We realized that what we are trying to accomplish with this brewery is really bigger than the three of us,” said Woodie Bonds Jr., brewmaster and co-founder of Vine Street Brewing. “This is something that has the ability to affect the community, their families, really everybody. So who are we to not make that happen?” The business — Kansas City’s first Black-owned brewery — is set to pour before year’s end, and perhaps as early as October, its founding partners told Startland News.

“It’s a huge responsibility,” added Kemet Coleman, co-founder and well-known musician and creative. “So there is a lot of pressure, but I think we’re up for it. I mean, it’s not like we haven’t faced pressure before.”

Vine Street Brewing Co. previously announced its location in the south building at 2000 Vine, the revitalization project of a pair of 150-year-old stone buildings that previously housed the city’s water and street departments just south of the 18th and Vine Jazz District.

Bonds Jr. and Coleman said the founding trio — which includes fellow brewmaster Elliott Ivory — was intentional about choosing where to open the brewery.

“The vibe, the community — we felt like that was the right home for what we were doing, and for what we are trying to accomplish not just as a brewery, but as a community partner,” Bonds Jr. said.

Their goal is to blaze a trail not only for themselves, but also for other people who have not had equitable access to opportunity, the emphasized.

“We hope that it’s not just a destination, that us opening allows other doors to open for other individuals who look like us to be able to start something … and take this energy that’s cultivated here and spread it through the whole neighborhood,” Ivory said.

“There’s a little pressure just because we wanna be successful for us, but we also understand that our success can breed opportunity for others and other communities that may not have had those opportunities,” Bonds Jr. added. 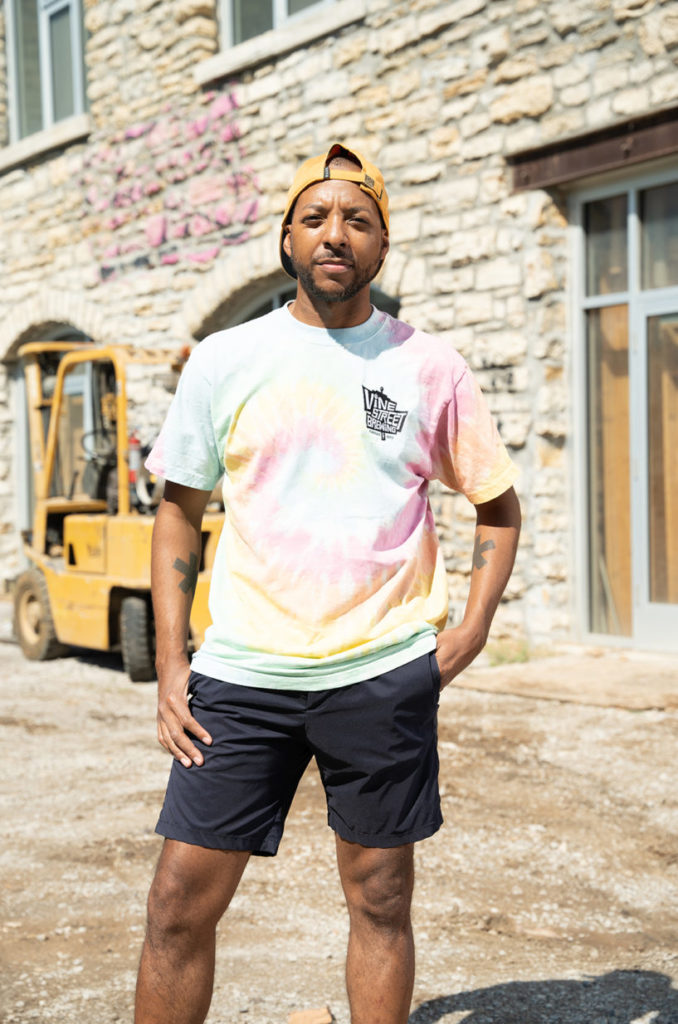 Coleman began dabbling with the idea of starting a brewery during the COVID-19 stay-at-home orders in 2020. He asked Bonds Jr. to join him — with the latter agreeing on the condition that he could bring Ivory on board, too.

Bonds Jr. had created the Hip Hops Hooray beer festival and met Ivory in 2019 through the Kansas City homebrewing community. Coleman and Bonds Jr. have known each other since 2013.

“I’m proud of us coming together as, really, three separate individuals that were working in the industry in some capacity and now we’re working together,” Coleman said. “I think that’s a great symbol for what we can accomplish if we all come together.”

Working on Vine Street Brewing comes in addition to their day jobs: Bonds Jr. works at Ford Motor Company, Ivory is a project manager at Honeywell, and Coleman runs his own creative consulting company, Kemet Creative, in addition to his various music projects. Despite the challenges posed by the trio’s busy schedules, and the daunting responsibility of opening the first Black-owned brewery in the region, they all agreed that the significance of this opportunity was too much to ignore.

Much like the physical structure that Vine Street Brewing will occupy, Bonds Jr. said that in many ways, change will actually mean restoration.

“I feel like anytime I walk around 18th and Vine, I can almost just see its past, and I think that its future looks a lot like its past,” Bonds Jr. said.

With a founding group that includes a professional musician and a music lover — Bonds Jr.’s Hip Hops Hooray was a nod to both beer and hip hop — the location near Kansas City’s historic jazz district is a natural fit. Coleman said that live music will inevitably be present at the brewery.

He hopes Vine Street Brewery will become a “third space” for the neighborhood, a communal location for people to exchange ideas and meet one another.

“We really wanna be a third space for the 18th and Vine area,” Coleman said. “There’s not a lot of them right now. We wanna be the living room of the Jazz district, a place where people can begin and end their night.” ‘This is about love for the city’

So what can patrons expect once the first kegs are tapped?

Bonds Jr. is known for his unique recipes and flavors — he calls Ivory his “brew-mother” because his analytical side balances out Bonds Jr.’s creativity — so the rotating taps promise to be a departure from traditional beers.

“With all the innovation that Woodie’s gonna come up with on the recipe side, we can start to really get creative in the brewhouse,” Ivory said.

“If you leave and say, ‘What the hell was that?’ one time, then I feel like I’ve done my job,” Bonds Jr. added. Annie McGinnis will be running the front-of-house operations. Despite being out of the service industry for 10 years, McGinnis has vast experience in the industry, including as Coleman’s boss 13 years ago at the P.F. Chang’s location on Kansas City’s Country Club Plaza.

When she heard about Coleman’s involvement with Vine Street Brewing, she reached out to congratulate him. Coleman responded with a job offer.

“I knew it would have to be something extremely special for me to go back,” McGinnis said. “To be able to re-establish a piece of history in that building, it felt like it was a really good fit.”

McGinnis described the brewery’s opening as “a moment to really let Kansas City shine” and echoed the sentiment that Vine Street Brewing represents so much more than just a brewery.

“The vision is not about just owning a business,” she said. “It’s not just about making money. It’s about building relationships and bridges. . . This is about love for the city.” Fittingly, collaborations with other Kansas City-area breweries — and perhaps other Black-owned breweries across the country — are also planned.

Ivory and Bonds Jr. have already collaborated on batches with roughly a dozen local breweries, and the group has received support and advice from numerous others.

“It’s great that this community has really been there for us and really helped us,” Bonds Jr. said. “The craft beer community has definitely been a blessing for us.”

“I don’t know another industry that would let almost-strangers come to their facility, brew a beer, do a collaboration, and have a hand in the recipe and the flavor,” Coleman said. “That’s next level.”

Wind Shift Brewing in Blue Springs is one local brewery that has already worked with Vine Street Brewing, collaborating on a blueberry rye pale ale recipe in June. Co-owner Tony DiPlacito met Bonds Jr. years ago through the homebrewing community and reached out to him as soon as he heard about Vine Street Brewing.

“They’re bringing something that nobody else has brought to the game,” DiPlacito said. “They’re such a cool crew. You just can’t help but root for them.”

Bonds Jr. said it’s uplifting to know that the Kansas City craft beer community — and the community as a whole — is firmly behind them.

“It is very important that friends, family, people who don’t know you, are really rooting for us,” he continued. “We wanna take that energy into that community and do whatever we can to bring back the history of 18th and Vine.”

Ultimately, Bonds Jr. hopes that folks in 18th and Vine, Kansas City, and beyond, will come along for the ride.

“This is our dream. This is our passion,” he said. “This is the opportunity of a lifetime, and we’re just looking forward to serving people quality beer with a twist and seeing where this road goes for us and for others.”