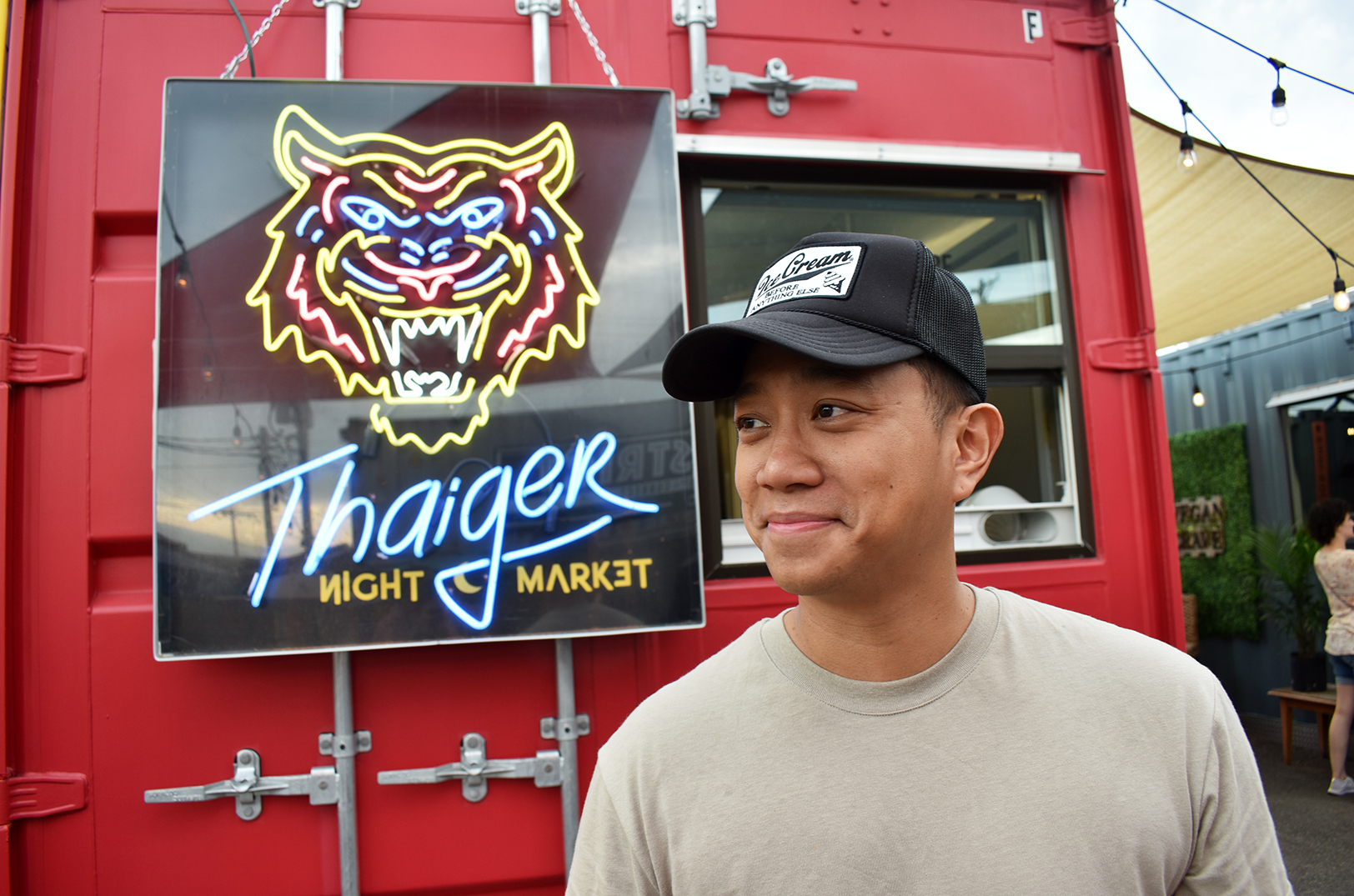 When someone orders the spicy pho or crispy pork belly bowl at Thaiger, they soon receive it just as Adison Sichampanakhone and his family make it at home, he shared. “If you were to come to one of our barbecues or cookouts, you would see it’s the same preparation, same sauce as we do here at Thaiger,” said Sichampanakhone, who co-founded Thaiger in 2020 with his fiancée, Jackie Faltermeier. “I grew up with these flavors, so it’s always fun to introduce people to something new.”

With Laotian parents and family from Thailand, Sichampanakhone set out to create a menu that diners couldn’t find at traditional Thai restaurants, he said. Rather, he wanted something a little more personal for his Iron District concept in North Kansas City.

“That scared me a little bit,” Sichampanakhone admitted. “I didn’t know how adventurous people would be, but we’ve had a really good response. We only have five menu items, but they are high quality items.”

Iron District is an outdoor dining and retail destination that repurposed colorful shipping containers to provide a space for local businesses. The district also has an outdoor food court area and stage for musical performances.

Click here to check out the other local businesses in Iron District.

The original menu for Thaiger was curated with the expertise of Sichampanakhone’s cousin, Anourom Thomson — who is the head chef and owner of Anousone at Strang Hall in Overland Park. The duo originally came up with a dozen dishes, but quickly realized the pain points of offering too much.

“You would think that because we cook this food at home, it should be easy; but in reality, food is very difficult,” Sichampanakhone said. “We had a weekend where it was super busy, and people were waiting an hour for food. So we sat back down and created a menu where the preparation is complex, but then the food can be cooked and served quickly.”

Thaiger’s egg rolls, or as Sichampanakhone refers to them as “momma’s egg rolls,” are prepared by his own mother — adding another found-only-here family recipe to the menu, he noted.

“I’m blessed that she does that for us,” he said. “She has her own way of making them that is unique and difficult to replicate, so it is cool we can share that with everyone.” Sweet tooth side of business 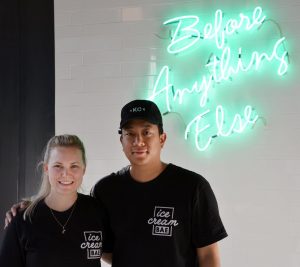 Although Thaiger wasn’t Sichampanakhone’s first business, it was his debut venture into food. His entrepreneurial journey began when he opened Boh Bah, a boba smoothie shop, at Oak Park Mall in Overland Park in 2012, and he has gone on to launch the ice cream concepts Sno Buh and Ice Cream Bae with Faltermeier.

“I come up with these crazy ideas, and Jackie is always there to support me,” Sichampanakhone said. “She provides the structure and makes sure we have a manager and that things are ordered on time. It’s a pretty good combo.”

Ice Cream Bae opened its first storefront at Park Place in Leawood in 2020 and is set to open its second location in the Country Club Plaza this August.

“August is going to be busy but fun month,” Sichampanakhone said, noting that their wedding will also take place around the time of Ice Cream Bae grand opening. “… We are going to add some more menu items we’ve been thinking about that aren’t currently available at the Park Place location. I’m excited about that.” Along with reducing the menu to an intentional selection of offerings, Sichampanakhone has also elevated Thaiger throughout the years by hiring a strong team, he shared. Thaiger at the Iron District in North Kansas City

“When we started, we were hiring a lot of younger staff members who had school and other responsibilities, but now we have transitioned to more proper chefs,” Sichampanakhone said, raving about Thaiger’s head cook, Ronnie Forschen. “We finally have a solid core team and that will hopefully lead to us being able to expand to a brick-and-mortar location.”

Sichampanakhone and his crew have already been looking into locations in Midtown, as well as dreaming of a spot in the Crossroads Arts District.

“There have been some opportunities in Shawnee and Overland Park, but I think we’d really like to have Thaiger’s first brick and mortar be in downtown Kansas City. Our goal is to secure a brick-and-mortar location by the end of the year.”

Sichampanakhone’s secret to building a dream team: treat them well.