TULSA — Funding for its rapidly scaling education gaming platform is expected to fuel Boddle Learning’s nationwide growth, as well as help the startup expand its product offerings outside of math and develop new interactive multiplayer experiences.

“It’s always been one of our goals to inspire learning anywhere,” said Edna Martinson, co-founder of Boddle, describing the tech’s surge of popularity during the pandemic. Since its product launch in 2020, Boddle has grown from 2,000 to more than 2.5 million students, and is currently signing up more than 10,000 students each day.

Piloted in Kansas City where Boddle was initially built, the gamified platform has become a favorite among educators who have posted viral videos about the platform that have garnered millions of views on popular social media platforms like TikTok and Instagram. Its engaging gameplay allows students to battle each other while mastering math skills, and offers educators the ability to create custom assignments to match their lesson plans.

Click here to explore Boddle and its work to transform math and unlock confidence.

Led by San Francisco-based Alpine ventures, the $3 million seed round announced Friday to help boost Boddle is joined by other firms, including KCRise Fund, Lightship Capital, Atento Capital, and ACT Ventures, as well as angel investors like Anthony Showalter, former co-founder and COO at Pear Deck. Boddle previously announced a $1.3 million round, led by Tulsa-based Atento in October 2021. Returning investors for the latest raise are key, said Martinson.

“We’ve got some great folks on our cap table, and to have funds like KCRise, Atento, Lightship, Cortado and Rise of the Rest recognize the impact we’re making and believe in our team and vision, so much so as to double down on their investment in us is amazing,” she said. “We’ve grown so much with them and excited to scale even further, especially with a few new strategic investors on board.”

Earlier this year, Boddle made its entrance into multiplayer and augmented reality (AR) via a collaboration with AT&T that brought interactive, immersive gameplay to life. The high capacity of AT&T 5G can help carry the load of multiplayer activity, spatial computing, and AI analytics to keep students engaged in a fun and meaningful way, said Clarence Tan, co-founder of Boddle. 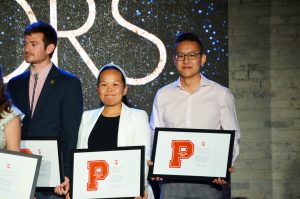 “The release of Boddle’s first multiplayer game in collaboration with AT&T boosted the average session length for students by 58 percent,” said Tan, who won the 2022 Best Pitch award during the recent Pipeline Innovators Gala in Kansas City. “The addition of AR has been an innovative opportunity to be at the forefront of the future of learning both in and out of the classroom, as it breaks down the walls of what educational experiences can look like for kids.”

Boddle has been used in 140,000 K-6 classrooms across every U.S. state, but its leaders believe its gamified learning needn’t be confined to the four walls of a classroom, the company said.

“Seeing the transition from Boddle being used as a practice tool by teachers during remote learning, to now being baked into teachers’ in-class lesson plans, and used as a homework and healthy screen-time resource at home shows a clear demand for engaging and interactive learning experiences,” said Martinson. Boddle is bridging the gap — “providing an experience that is both fun and transformational for kids whether they are in a classroom, an after-school program, or at home” — its co-founders emphasized.

Since 2018, the duo has been awarded numerous accolades including funding from Pharrell William’s Black Ambition, being named one of the 5 winners nationally of the Edtech Creators Challenge by GSV and Unity3D, and a Google for Startups Black Founders Fund awardee.

Boddle was named one of Startland News’ Kansas City Startups to Watch in 2020.

The startup relocated in 2020 in Tulsa after receiving significant investment from Atento Capital.