Deep fried and doubling down, the minds behind J. Rieger and Co. are distilling a new era that’s expected to make the local tourist destination one of Kansas City’s best places to work — and to grab one of its most legendary spicy chicken sandwiches.

“If you didn’t already know, you quickly come in here and find out what an ambitious project this was,” said Ryan Maybee, co-founder and managing director, detailing the original and revived history of the distillery and recalling ways it’s become a must-see attraction and a staple of Kansas City culture. 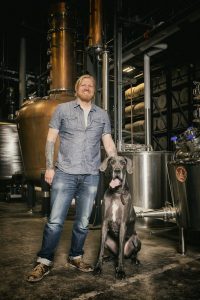 But the East Bottoms-bottled Rieger has become something even more important than a happy hour destination to the community — its an eager employer, Maybee said, noting additions to the company’s sprawling space continue to create new jobs that locals want to keep.

“I don’t know that Andy [Rieger, founder] and I fully grasped — when we were in the creative and conceptualization stages of it —  the scope of this business and the scope of this building and what we have here,” he continued, noting the Rieger facility has since its launch in 2019 grown to house a 3,000 square foot exhibit and visitor center, distilling space, and three separate event and entertainment venues that include the Monogram Lounge, Electric Park Garden Bar, and The Hey Hey Club.

Want to explore the full history of J. Rieger and Co.? Click here for more.

Figuring out how to establish each of its venues as its own unique space with its own set of offerings — designed to get guests in the door or keep them there once they’ve taken a tour — is the company’s latest mission, Maybee said, adding its expected to be fully realized with the hire of Chef Charles d’Ablaing, a James Beard Award finalist and star of the Kansas City culinary scene. “I didn’t want to end up at another hotel or another restaurant,” d’Ablaing, who recently closed his business, Brookside Poultry, said of the opportunity to join the Rieger family as culinary director — a move that offered him the chance to return to work, without returning to work, he joked.

“When I interviewed here, I was like, ‘This is awesome. This could be something,” d’Ablaing said, excited by the chance to revamp menus for each of the Rieger venues and events and create continuity between them that previously lacked.

“The strategy moving forward is to elevate the dining experience,” he added, declaring a desire to make the food offered by Rieger as irresistible and famed as the libations it plays a companion to.

“Good food, good drinks, good service — that’s the goal. Every time I bring someone out here, they’re like, ‘I could spend the day here,’” d’Ablaing said, honing in on the exact reaction he, Maybee, and the entire Rieger team hope customers begin to adopt as they create an all inclusive space that feels like an attraction in their own backyard. From its Electric Park food truck to upscale dining service at The Hey Hey Club and in private venues like Jacob’s Barrel Room — which d’Ablaing said is unintentionally J. Rieger’s best-kept secret — the chef hopes to create menus that offer something for everyone at every price point.

But that doesn’t mean skimping on quality, he said.

“[At the Hey Hey Club] we brought in Ossetra caviar, A5 wagyu beef — I don’t know anybody else in town [offering these.] Then down at Electric Park its theme park food, served out of a truck.”

Menu changes have already started to take effect across Rieger’s venues with additional roll outs planned on a steady basis through the summer, the pair told Startland News. The culinary expert is also expected to debut at Rieger his famous spicy chicken sandwich, a sellout menu item that drew crowds and defined Brookside Poultry, later this year.

“Those will make an appearance. It’s the perfect opportunity and we know there’s [demand] for it,” he said, adding he also hopes to start bottling sauces under the former Brookside Poultry label to offer for sale in the Rieger gift shop.

Bringing talent such as d’Ablaing into the fold at Rieger is a dream come true for its team, Maybee said of the addition.

“We were desperately looking for the right person to take over our culinary program. We really needed a strong leader and I didn’t know that we would be able to find someone that could check all those boxes. … Then Charles became available,” he said.

“It was really good timing and I think it’s worked out for everybody involved.”