Season 1 cast of "The Blox"; photo courtesy of Weston Bergmann

The premiere of a 17-episode, gamified entrepreneurship challenge marks a pivot in reality TV — as “Shark Tank meets Top Chef” within a competition show that focuses more on startup development than sensational conflict.

“We weren’t prepared to go down a ‘messy’ reality TV path, because we don’t want to exploit or hurt entrepreneurs. But, TV still needs points of contention or it’s boring,” said Weston Bergmann, creator of “The Blox” docu-series, which premiered Thursday on The Blox app. “So we turned the first formal season into a giant competitive game. This made the ‘drama’ the game itself, in the same way that sports have drama but said drama is mostly confined to the field.” Click here to see the entrepreneur’s playing in the first season of “The Blox” — including a familiar startup face from Kansas City.

“Our thought process is if we can inject an entrepreneurship curriculum inside of a show that’s not boring, many more people will actually watch it — and the more eyeballs on how companies are actually built is good for the world,” Bergmann, also the founder and lead investor at Kansas City-based BetaBlox, an exclusive school for startups, told Startland News.

The game: Twenty startups are selected for “The Blox” and confined to a “bubble” within Kansas City (more on that later). Every day the entrepreneurs compete in a series of exercises, pitches, and tests where they earn points that accumulate throughout their stay — creating daily winners around such entrepreneurial themes as inbound marketing, growth hacking, and fundraising.

The show is judged by “rockstar entrepreneurs” at the helm of their own growth stage ventures, Bergmann explained.

“And whoever had the most points at the very end was crowned the greatest startup on ‘The Blox,’” he said.

Season 1 launched in full today with Season 2 and 3 already filmed and set to premiere this spring and summer respectively. Judges on “The Blox”

The concept is a more fleshed out and gamified version of “Founder’s House,” a pilot for which was shot in the lead-up to BetaBlox’s demo day in January 2020. About 10 BetaBlox companies from across the region were placed in a house in Kansas City, put through a series of activities similar to those experienced in the incubator, and filmed.

“The Blox” goes further — taking about one third of the standard BetaBlox curriculum and jamming it into one season, Bergmann said.

“So what normally takes a Bloxer like 4 months to get through was accomplished in one week,” he detailed. “Although everyone came for different reasons, it’s my aim that this is the main reason they come: accelerated entrepreneurial education. We dropped them into the deep end and helped them not drown. They left stronger.”

Click here to watch a trailer for “The Blox” or learn how to view the whole series now.

Bergmann is, of course, no stranger to reality TV himself — a cast member on MTV’s “The Real World: Austin” long before smartphones made streaming a docu-series possible, and a frequent competitor on the Paramount+ “The Challenge” series.

“The 20 seasons of TV I’ve done [since the Austin portion of the franchise] were all within that ‘Real World’ family,” Bergmann said. “‘The Real World’ was created by Mary-Ellis Bunim and Jonathan Murray, iconic entrepreneurs in their own right. They created the literal genre. How many people get to say they’ve learned from the people that created an entire industry?”

It was the equivalent of going to Harvard for reality TV, he added.

“I look up to what they did more than can be described, and throughout my two decades on TV with their family, I’ve watched their company evolve through my own lens, which is that of an entrepreneurial obsession,” Bergmann said. “When filming and producing ‘The Blox,’ I was taking leadership cues from my favorite executives; angles from my favorite camera operators; shortcuts from my favorite audio engineers; editing organization tricks from my favorite story producers — and the list goes on.”

“The way I describe it is a little cocky, but it’s true — no one sits on the corner of entrepreneurship and reality television quite like me,” he continued. “I was born into an obsession with starting companies, and then groomed to be a television creator. In my life I’ve been able to excel in both realms, and now I’ve combined them in a way that few people in the world could do.” 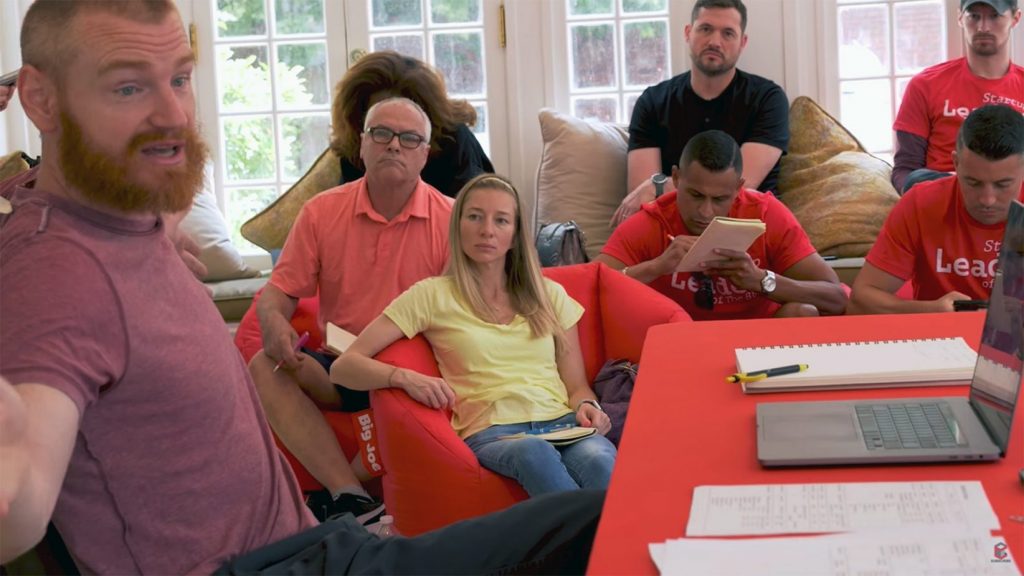 Weston Bergmann, creator of “The Blox”, working with founders on set in a still from “The Blox”

Bergmann’s plans for “The Blox” pre-dated COVID, but the ongoing pandemic certainly played a role in bringing the show to life, he said.

“This idea had been in my head for years and COVID backed me into a corner where I had infinitely more time and validation for trying such an absurd thing,” Bergmann said.

“It presented new challenges, of course, namely, moving 100 people to Kansas City to all live amongst each other during the pandemic,” he continued. “To accomplish this, I took a page from my experience in the big leagues of TV, and we created a bubble. All cast members were a combination of vaccinated and tested, and then not allowed to leave the home. All the producers, camera operators, and chefs all lived in this bubble and didn’t leave.”

It was quite a feat, Bergmann admitted. With 20 startups featured per season — and three seasons shot — that meant corralling 60 companies and those roughly 100 people.

“The demand to be on the show was nothing short of remarkable,” he said, noting a casting team had to be moved to Kansas City to accommodate interest in joining the initial seasons. “And when [the entrepreneurs] got here, they were so invested it was inspiring. They loved it, and it changed their lives. There was a lot of crying, but the good kind.”

More than 5,000 people applied to “The Blox,” from every single state in the country, Bergmann said.

“They were crashing our application page,” he said. “We had to turn it off because we had enough to choose from. For the seasons we plan on filming this coming year, we project over 50,000 applicants.” Weston Bergmann, creator of “The Blox”, working with founders of Tulsa-based REI Pro+ on set in a still from “The Blox”

An app for an attitude

“The Blox” stays true to the BetaBlox brand, Bergmann said, drawing parallels to the popular incubator program that, prior to reality TV competition, focused primarily on entrepreneurs in the Kansas City and Tulsa markets.

“BetaBlox is a lot of things, but more than anything I’d say it’s an attitude. Said attitude is that we don’t need anyone,” he said. “We don’t need investors, grants, events, partners, board members — none of it. What we need is to build things that solve a real problem and then promote said solution to the market at scale. We simplify it down to building things and selling them — and anything else is a waste of time.”

That attitude isn’t meant to be taken literally, Bergmann said, acknowledging founders, of course, need and use resources.

“But we present ourselves this way so our entrepreneurs know that 90 percent of what we’re going to hold them accountable to is making things and selling them,” he said. “Whereas we’ve seen other programs and curriculums invert those priorities, where that 90 percent of effort goes toward looking for investments from third parties.”

“Inevitably, when your hand is out and you haven’t prioritized building something and selling it — your hand will get slapped,” Bergmann continued. “So our attitude of not seeking outside help, ironically, is the key to getting it.”

BetaBlox has taken that attitude and injected it into a series of new products that essentially sits on an assembly line of venture development, he said.

“So entrepreneurs can arrive at our homepage, quickly realize when and where they are in the process, and pick the correct path that matches what kind of help they need,” he said. “‘The Blox’ is one of those products. And it has the same aforementioned gritty attitude of bootstrapping, building, and selling.”

The show is a keynote feature of The Blox app. To supplement the docu-series, a slew of other free digital assets are available to help empower entrepreneurs, Bergmann said.

“We want startups from across the world to pull this thing out daily,” he said. “We have tools designed to help them learn, work harder/longer, and even relax so they can prep their bodies and mind for their next workday.”

Among the available features:

“Turn it on, tell our tech what you’re working on, listen for 10 minutes, and our science will subliminally alter your brainwaves to be at the optimal state for your task so you can zone out and work,” Bergmann said of the Functional Music feature.

Time within the app is tracked by minutes to help users analyze how much they’re studying and when they’re working so they can gamify their own development as an entrepreneur.

Casting for the next season of “The Blox” has already begun.

Click here to learn more about becoming the greatest startup on “The Blox.”