After a year of serving culture in coffee, Jackie Nguyen has found a permanent home for her mobile Vietnamese cafe in the Columbus Park neighborhood, she said, but the actress-turned-activist plans to take an unconventional route to opening the storefront.

“I want to create a different path and show that minority, first-generation women can start a business and be very successful in it,” said Nguyen, who founded Cafe Cà Phê in fall 2020 after the pandemic paused her stage career. “Most business owners have to take out a huge loan, so they can start their business; then spend the first few years trying to get out of debt versus trying to profit. I think that is not a good business model, especially for those of us who don’t have mommy and daddy’s money. “Whether it’s grants, whether it’s donations, whether it’s working five times harder in the beginning — I am determined to figure out a way to fully fund our brick and mortar,” she continued, noting that she plans to open the cafe’s storefront in December, and later this fall will announce a grand opening date for the space at 916 E. 5th St., in the former Nouveau dance and yoga studio a couple blocks from Vietnam Cafe.

The Columbus Park neighborhood was selected because of its significant Vietnamese refugee population, Nguyen said, along with the lack of nearby coffee shops.

“We tried to look at different neighborhoods that fit with our vibe and values — and that was Columbus Park,” she said. “We want to bring more culture to what already exists in Columbus Park. … I hope we are going to be able to create a place that is safe for Asian people, for marginalized people.”

Click here to read more about Jackie Nguyen and her start with Cafe Cà Phê. Cafe Cà Phê, known for its specialty drinks containing flavors of ube and matcha, has built its name within the local pop-up community — either organizing or attending more than 80 pop-ups in the past 12 months, Nguyen noted.

“The pop-up culture has been our bread and butter,” she shared. “It’s been an awesome way to collaborate and support other businesses, as well get our name out there. … I love hosting events and giving other small businesses the opportunity to showcase what they’re about. That’s how [Cafe Cà Phê] got started, popping up at different nail shops.”

Cafe Cà Phê currently hosts pop-up events in the parking lot next to Sequence climbing in the Crossroads Arts District, but Nguyen is excited to organize pop-ups at her brick-and-mortar location once it is open, she shared.

“Sequence has been so supportive. I still feel guilty sometimes asking if I can host another event, but they’ve been really great,” Nguyen said. “Plus, they are half Asian-owned, so they really support the work we are doing.”

Along with sharing traditional Asian flavors with the Kansas City community, Nguyen serves up educational resources on race, gender and sexual-orientation equality through her activism work.

Shortly after an Atlanta spa shooting hit the national news in March — an incident in which a gunman targeted Asian-owned business and killed eight people, including six Asian women — Cafe Cà Phê organized a “Stop Asian Hate” vigil in the West Bottoms near the business’ then-winter home inside Firebrand Collective. The event honored the victims, as well as every life impacted by hate crimes in the past year. “When I first opened Cafe Cà Phê, I would have never considered myself an ‘activist,’” Nguyen admitted. “Being an activist is one thing that scares me because there’s a lot of danger that comes with that. So people would say, ‘You’re such an activist!’ and I was like, ‘No, no I am not. I just own a coffee shop.’ 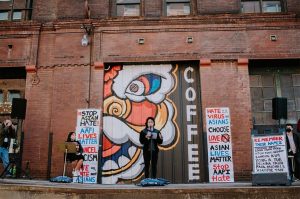 “I don’t think anyone Asian could have prepared themselves for this past year,” she said, referencing racism tied to the COVID-19 pandemic and perceptions about its origins. “We, as a culture, have been so conditioned to this type of racism, which is sad, but it’s true. So if I can be this voice, and encourage others to speak out, then I am happy to be that.”

Being a leader in such a space comes with positive and negative feedback, Nguyen noted. Throughout it all, she felt waves of fear and exhaustion, she shared.

“There were days that I’ve had to close the shop, because I just woke up feeling unsafe,” Nguyen said. “It was like, ‘We are so vocal about being Asian and what we stand for — are we next?’ It was hard to navigate. Emotionally, I hate closing the shop. It makes me feel guilty. But I didn’t want to put anyone at risk, and we needed the rest. ”

Even at times when Nguyen felt the most trepidation, she decided to continue being vocal in speaking out against racism, she said.

“Suppressors want you to be quiet; they want you to cower,” Nguyen said. “And I am not going to let them win.” Nguyen still receives random hate mail and voicemails; but she has also formed a community with other minority business leaders, providing a sense of comfort and unity against the hate, she explained.

“During that time [after the shooting], other Black leaders and Lantix leaders within the community reached out, and we did Zoom meetings to discuss our personal experiences,” Nguyen recalled. “That platform was really amazing. They gave us space to talk about what was going on with us and how they could be better allies. I know that they will always be here to support us, and the same goes for them.”

In Cafe Cà Phê’s brick-and-mortar location, customers can expect a safe space where all members of the community are welcome, Nguyen said.

“What I noticed in [our temporary space in] the West Bottoms was that a lot of people would feel comfortable hosting meetings and friends,” she noted.  “We are looking forward to having that permanent space for marginalized communities to come together and know they have a home with us.”

With financial support being Cafe Cà Phê’s biggest need, donations big and small to the cafe — in addition to purchases — are welcome, Nguyen said.

“We hope that people can feel like even if they donated $1, they are an important part of helping this come together,” she said. “I know money’s not super readily available for a lot of people right now because of the pandemic, so we would also love a quick share on Instagram. If people want to volunteer their time, we are looking for painters, people to hand out flyers, help with our activities — even just donate their good vibes.

“If the community really envisions the same things we do, we want them to be part of this.”