Home News New ranking: How KC can break into the Top 10 Midwest startup cities (and why it hasn’t yet)

New ranking: How KC can break into the Top 10 Midwest startup cities (and why it hasn’t yet) A freshly released ranking of Midwest startup hubs shows Kansas City maintaining its years-long position at No. 12, but warns — despite a few recent headline-grabbing wins — the metro faces the threat of stagnation without increased activity, startup reinvestment and government support.

“You had to get more funding and big exits just to stay put in this year’s rankings,” Victor Gutwein reflected, noting “rapid, unprecedented IPO, acquisition and mega-round activity has been seen across the U.S., and the Midwest is in the thick of it.”

Even a big Kansas City event like BacklotCars’ $425 million exit in late 2020 isn’t enough to move the needle on its own, emphasized Gutwein, offering Startland News analysis of M25’s 2021 Best of the Midwest: Startup City Rankings report.

“Gone are the days when the front page was a single $100 million financing round or one $1 billion exit in a year — Now lots of ecosystems are getting their second, third or beyond major outcomes,” said Gutwein, founder and managing partner at M25 — an influential venture fund in Chicago with Kansas City portfolio companies like backstitch and Super Dispatch. “It’s a crowded, competitive landscape to stand out in now.” “The story of this year’s Midwest Startup Cities Rankings is that what used to work in past years doesn’t work anymore. This competition has gotten much more intense. Remember — these rankings are relative, where each city is competing against the other to have the shiniest ecosystem.”

Click here to read Gutwein’s overall analysis of the 2021 report.

M25’s 2021 ranking examined 59 Midwest cities based on startup activity, access to resources and business climate. Kansas City has earned a spot at No. 12 for three of the five years M25 has created the report — dipping to No. 13 in 2018 and 2019 before popping back up based, in part, on “impressive” raises from C2FO and PayIt in 2019, as well as the 2020 relaunch of Techstars Kansas City, Gutwein told Startland News previously.

Click here to check out the full 2021 Best of the Midwest: Startup City Rankings — and see which three cities have topped the list for five consecutive years.

Kansas City continues to shine through on “Big Outcomes,” one of the M25 report’s heaviest-weighted variables, Gutwein said — with the City of Fountains on the same level as No. 8 Ann Arbor, Michigan, and not far behind even No. 3 Pittsburgh, Pennsylvania, in that category.

“It’s objectively a great time to be a founder in KC,” he said. “There are new funds and funding resources and now KC has a consistent history of large fundraises and exits that should continue to drive both startup formation and funding.”

Getting to those next steps will be key for Kansas City, Gutwein emphasized.

“We’ve seen it recently — Backlot Cars, PayIt, C2FO, EyeVerify — those are major events,” he acknowledged. “And while that’s now almost par for the course amongst these major tech ecosystems, the one thing I personally haven’t seen yet is a lot of spinout success stories [coming from Kansas City].”

“Where are the early engineers and salespeople from those companies out starting their next big thing?” Gutwein continued. “Columbus (Ohio) did it well with CoverMyMeds. Nebraska is starting to with Flywheel. But so far, I haven’t seen or heard of these KC exits creating a lot of momentum for startup creation in the community, which is disappointing, because experienced founders can drive a lot more successful outcomes and attract more venture capital.” In contrast to Kansas City, fellow Show Me State startup city St. Louis landed at No. 5 on the ranking for the third consecutive year.

“St. Louis has a significantly higher number of startups, startup density, and startup momentum [compared to KC],” Gutwein explained. “In our Access to Resources section, St. Louis has large margins in large corporations, the university ecosystem, VCs and capital invested.”

Click here to explore the factors behind St. Louis’ ranking.

Both ecosystems suffer from anemic state investment and incentives for startups, he added.

“KC’s only significant edge in Access to Resources is a modestly more educated workforce and more loans to small businesses,” Gutwein continued. “For Business Environment, it’s a bit of a wash, but St. Louis has more population, lower cost of living, lower labor costs, a superior airport and population access, while KC can only tout improved internet access.”

Show Me a path forward

No. 12 Kansas City might not be poised to overtake St. Louis in the ranking, but cracking the Top 10 could be in sight, Gutwein said. 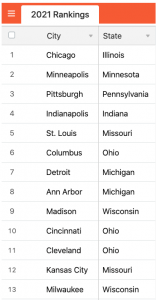 Kansas City is in line with those cities on number of startups, startup density (excluding the “super-dense” collegetown Madison, Wisconsin), and noticeably ahead in big outcomes like funding and exits, he added, before ringing an alarm bell.

“But KC is lowest [among those cities] when we look at startup momentum (or growth in number of startups from 2016 to 2021),” Gutwein said. “That’s concerning. How do we get more startups being formed?”

Among the overall ecosystem challenges he pinpointed: KC has fewer big corporations (specifically Fortune 500s and 1000s) than cities like Milwaukee, Cleveland and Cincinnati, as well as a weaker university ecosystem than many of its peers, according to M25’s analysis.

“It’s a bit disappointing, but only two ecosystems in these states grew: No. 27 Columbia, Missouri, rose by one position (anchored by newly minted unicorn EquipmentShare) and No. 19 Lincoln, Nebraska, by 5 (an all-around strong college town with large VC-backed companies and a state and local city that really cares about nurturing startup development with hard dollar investments),” he said, detailing the outlier success stories.

Of note: the capital cities of Missouri and Kansas rank No. 56 and No. 59 respectively out of the 59 communities examined in the M25 report.

“When I look at the major ecosystems across these four states, I see that Iowa and Nebraska have strong state investment programs and Iowa has a strong tax credit too, while Kansas has a tax credit and nothing else, and Missouri is barely doing anything,” Gutwein continued. “This is in an era where most states are being more aggressive — not less — in startup funding (look at North Dakota’s newly announced $250 million fund of funds for example).”

The result: Many of the MINK state ecosystems are relatively low on startup momentum — meaning they aren’t showing as much growth as other Midwest peers, he said.

“It doesn’t mean that these tech ecosystems aren’t growing, but they are just not growing faster than their peers in the Midwest,” Gutwein said.

Similarly, a city’s drop or failure to rise in M25’s rankings doesn’t mean the ecosystem hasn’t improved year-over-year, he emphasized.

“It’s really just a matter of time until KC can see the type of repeat founder success stories and multiple major outcomes on a yearly basis,” Gutwein said.