An Olathe biotech lab is once again growing “Coolest Thing Made in Kansas” honors with its breakthrough technology to help researchers produce stem cells at a massive scale to help fight pandemics and global diseases.

T-Blocks were announced Tuesday as one of the Top 32 contenders in the Kansas Chamber’s annual Kansas-made tournament, which highlights Sunflower State manufacturers. Cultured by the team at Ronawk — one of Startland News’ 2021 Kansas City Startups to Watch — the product is one of five Kansas City-area offerings included in the six-week contest.

Click here to vote for the “Coolest Thing Made in Kansas.” Those receiving the most votes in each head-to-head matchup will advance to the next round. 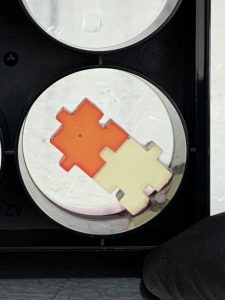 Founded in 2019, Ronawk develops customized 3D-printed consumables to accelerate cell production in the biotech, healthcare and agriculture industries. The startup is known for its technology called Tissue Blocks (T-Blocks), which allow for researchers to rapidly expand the growth of cells, eliminate the need to subculture and greatly reduce labor cost, A.J. Mellott said.

Built on modular and expandable 3D substrates, Ronawk’s T-Blocks (Tissue-Blocks) enable researchers across the globe to rapidly expand growth of cells — up to one trillion at a time — used in critical research that could save lives and shatter the COVID curve once and for all, said A.J. Mellott, president and co-founder of Ronawk.

The four-round tournament of Kansas-made products provides a valuable showcase for the startup, he added.

“It allows Ronawk to share with the public all the exciting ways we can use our T-Blocks to help patients and demonstrate why T-Blocks are one of the ‘Coolest Things Made in Kansas,'” Mellott said.

In the past year, the T-Blocks have gained new material properties that allow researchers to create micro tissues for assessing how different drugs work against cancer and other diseases, he said.

Click here to read more about the Olathe startup and it’s plan to launch a STEM training facility and create 150 jobs over next seven years.

The four other Kansas City-area products featured as nominees for “Coolest Thing Made in Kansas” include:

T-Blocks, Autoland, Microlite! and Tippin’s pies all vied for the title in 2020, as well, with T-Blocks and Autoland achieving Top 4 finalist status before ultimately being defeated by EMP Shield, made in Burlington.

Click here to see the full list of contenders — from a Wichita-made “Friendship Lamp,” Coleman coolers and hand-crafted artisan chocolates to performance airboats and flour tortillas — included in the first round of “Coolest Thing” voting.

“These 32 products are a great representation of the many items made in Kansas communities across the state, using a manufacturing process,” said Sherriene Jones-Sontag, interim executive director for the Kansas Manufacturing Council, an affiliate program of the Kansas Chamber. “There are large machinery, food products, vehicle supplies, items for your home, and products that help you travel by air, land, and water.”

The state’s manufacturing industry employs one out of 11 Kansas workers, she emphasized.

Products featured in the tournament were determined based on nominations and given an initial ranking based on the number of nominations, Jones-Sontag said.

Ronawk’s early ranking was No. 10, following local competition from Garmin at No. 3.

“[The tournament is] a wonderful opportunity for Kansas manufacturers to show their best stuff and prove they have what it takes to be the ‘Coolest Thing Made in Kansas,’” said Jones-Sontag.