Home News Victor Hwang’s Q&A with Andrew Yang: How small business can restart the US economy

Victor Hwang’s Q&A with Andrew Yang: How small business can restart the US economy 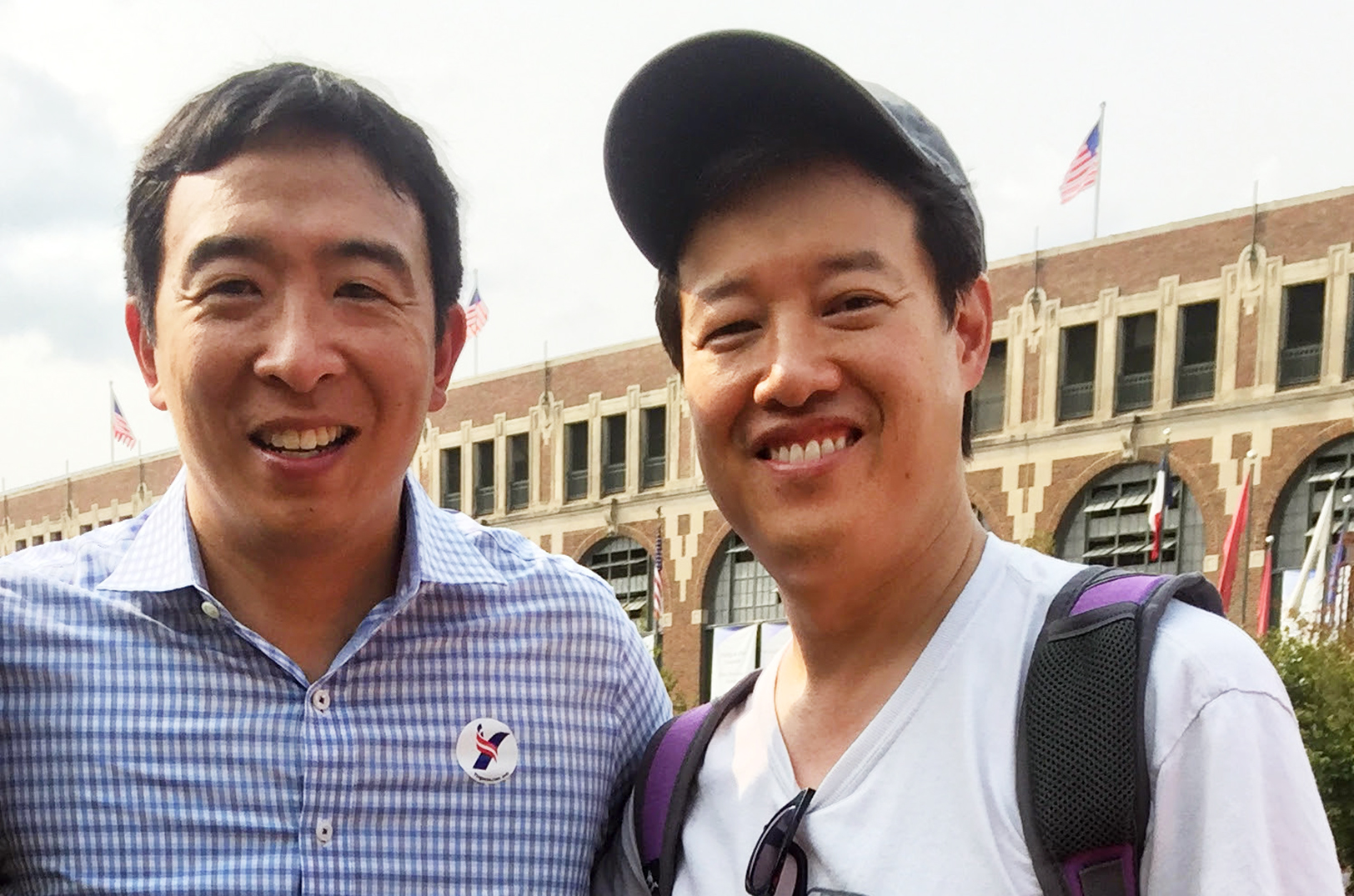 Editor’s note: The following is a Q&A-style interview between Victor Hwang, founder and CEO of the Right to Start movement, and Andrew Yang, former presidential candidate and founder of Venture for America. The full Q&A was originally published by Right to Start and is the basis for an Inc Magazine piece published this week — “Andrew Yang: We Need Dramatic Measures for Small Business.” VICTOR HWANG: You, Andrew, are like the son of the entrepreneurial support community. I don’t know if you think of yourself that way, but those of us who work with entrepreneurs do. You’ve been an entrepreneur yourself, and you started Venture for America specifically to help advance entrepreneurship in the parts of the country that really needed it. And then from that experience you also wrote this book, “Smart People Should Build Things,” which basically argues we built a society that deprioritizes entrepreneurial activity; that rewards thinkers and not doers. So, do you still feel the same way about that?

ANDREW YANG: I feel more strongly about it than ever, unfortunately. If you look at the business formation rates among young people in particular, they’re at multi-decade lows, and we’re making it harder and harder and not easier and easier for people to start businesses. This is going to have disastrous effects for us economically and socially. I felt so strongly about this that, as you know, I spent seven years helping to train and equip aspiring entrepreneurs to start businesses and grow businesses around the country. So this is near and dear to my heart. I appreciate you describing me as a member of the entrepreneurship community because I certainly came up that way and feel that way. It’s one reason I decided to run for president: I saw that the economy was getting harder and harder for entrepreneurs and not easier.

VH: With the work you’re doing now, I assume you don’t get as much time at the grassroots working with individual entrepreneurs the way you used to. But that stuff gives me energy. Does it give you energy? Do you miss that?

AY: What’s funny is that I ran for president, and that itself was something of an entrepreneurial undertaking, and I ended up attracting a team that reminded me very much of startups. Even now, in my post-campaign role — I started a new organization, Humanity Forward — so I’m around entrepreneurs all the time still, it’s just a different type of entrepreneur. But I’m also connecting with folks who see the same problems that I do and want to include them, that are from the small business owner and innovation spaces. I feel like this really is an extension of my past work, and I’m taking a lot of the same relationships with me while making new ones.

VH: You can see the thread that comes from your work helping entrepreneurs and then seeing that there were still gaps in the system, and the gaps were actually very profound, and that led to the work you’re doing now. But then we fast forward to 2020, and 2020 is kind of the “Great Implosion” in many ways. I think about how it shows that things were already hanging by a thread waiting to snap, and it took 2020, and things just have really snapped. So we’re already in the Startup Slump, as you mentioned, with new businesses starting at half the rate of four decades ago. But this pandemic has just been awful for so many entrepreneurs and small businesses. You might’ve seen some of these statistics — some estimates say 3.3 million businesses have closed down, Black-owned, Latinx-owned businesses have been even worse — and the majority of these appear to be permanent closures. So, what’s the state of the entrepreneurial economy today, as you see it, given what the pandemic has wrought on our society?

AY: I feel like we were in the midst of the greatest winner-take-all economy in the history of the world, pre-pandemic. And now with the pandemic, I’m heartbroken for all of the restaurant owners and small business owners who have been devastated, through no fault of theirs. The reality is that in an environment like this one, it’s the folks who took a risk that are getting punished the worst. Whereas if you’re part of a giant company that could even be growing during this pandemic, companies like Amazon and Netflix, then you’ll prosper. So what this pandemic has done is it’s really been terrible for most of the ground-level entrepreneurs that are trying to make positive things happen in their communities. It’s hard to overstate the damage that is being done right now in small business ownership and entrepreneurship. And those mom-and-pop businesses are the main employers in most communities. They’re the source of most American jobs. So the fact that they’re not going to be able to come back is going to keep us from recovering.

VH: Why do you think that story hasn’t been more strongly told? It is a noisy year in terms of news — there’s a lot of stuff happening — but it kinda feels like the individual suffering that happens on the level of one business dying is lost amidst the huge statistics around millions of people suffering out there. But it also feels like, from a public discourse standpoint, the individual Starter/Maker/doer just doesn’t get their voice heard that often. Do you think so?

AY: It’s one reason I love talking to you and Inc. [and other] entrepreneur-oriented communities: because I don’t think it does get the attention it deserves in mainstream media. I think a lot of it is around the way reporting happens. Let’s say you’re a reporter for a major publication. You’re stuck relying upon official statistics, which always tell an incomplete picture. You might even not be traveling and interviewing; you might just be operating via Zoom. And so the nature of the havoc being wreaked in the entrepreneurship community doesn’t really hit your radar in that way. I agree it’s a real problem. I wish more attention was being paid to the fact that up to half of independent restaurants may go out of business without relief, and that would be very difficult for many communities to come back from.

VH: In the news, it feels like an abstract problem, when for an individual business, it’s a very personal problem. But there is that disconnect between how we talk about it and how we live it and experience it. I want to turn to the role of what policy can do. You’ve been a tremendous advocate for the power of universal basic income — the idea of giving people a thousand dollars a month — and that that would be able to unleash people as entrepreneurs and remove them from the fear of getting basic necessities in life. I’d like to ask: is that enough in the current environment, given just how bad the damage has been this year to entrepreneurship? What else needs to happen?

AY: There are so many things we would need to do if we were going to give small business owners and entrepreneurs a real foothold moving forward. Certainly cash relief would be my first move, because you’d help families stay afloat, but that money would flow right into local businesses for groceries and car repairs and daycare and the like. But that would just be the beginning. We should be doing more to enable businesses to reopen on an individual level, and recognize that in many cases, a credit line is not the right solution. If I am a restaurant owner who has gone into a deep hole because of the fact that I haven’t made money for months, but my expenses have kept mounting, and then you show up and say, “Hey, here’s a credit line,” I’d say, “Look, I’m not going to reopen, because I’m never going to be able to pay back this debt regardless of who I owe it to. If you give me a credit line and I owe you instead of them, that maybe doesn’t make it possible for me to reopen it anyway.” So the rejuvenation of these businesses is going to take really significant and dramatic measures in many cases, but we are already doing dramatic things for the airlines and the biggest companies. We should be trying to do everything we can for the small businesses that can comprise the majority of employers. So cash relief to citizens would be number one, and then number two would be a targeted relief program for small business owners that would include, in many cases, forgiveness and grants in addition to credit lines and loans.

VH: I like the way you describe this — it’s almost a capital mismatch, in terms of the types of capital available to small businesses, entrepreneurs, versus the types of capital that the financial sector wants to sell them. Which is really interesting. At Right to Start, we put together a “Field Guide for Policymakers” — steps that policymakers can use — and new types of capital innovation are really front and center in that. Have you seen much energy around this, or do you think this is still an issue where the entrepreneurs tend to be voiceless?

AY: I’ve seen some people fighting for these types of solutions; I certainly will fight for them. I think it’s going to continue to be something to pound the table about and generate energy around because I don’t think it’s getting the attention that it deserves.

AY: To me, entrepreneurship is about solving problems. And we think about it very often just in the context of high-growth businesses. But if I start a nonprofit to address a need in my community, that’s entrepreneurship. If I create a campaign around an issue or to help raise awareness about something, then that’s entrepreneurship. There are different forms of entrepreneurship that we need more of. It’s one reason why I’m so passionate about trying to put resources in people’s hands: because you can’t necessarily prescribe what forms of entrepreneurship you want to see. People are going to take on different challenges, and we have to give people a chance to rebuild in ways that would benefit them and their families and their communities. To me, entrepreneurship is about allowing people the ability to actually build the thing that they know that the world — or their community — needs. And that’s unfortunately going to be much more difficult for just about everyone in this environment, but it’s exactly what we need more of right now.