Deanna Munoz’s childhood dream to become an artist — once faded and long forgotten — was revived years later by her 6-year-old daughter, said Munoz, founder of the Latino Arts Foundation.

“I wanted to be a graphic designer, but I kind of got caught up in a lot of different things when I was young and ended up having a son at the age of 16, so I had to quit my dream,” Munoz said. “I noticed that my daughter, Priscilla, started writing stories and painting when she was 6 years old. It was absolutely beautiful, and I didn’t want her to lose the dream.” Long before Munoz had a featured “hero” role on the latest season of Netflix’s reality makeover show “Queer Eye,” she spotted a need for finding a creative space for her daughter.

“I looked for an option in Kansas City, Kansas, and I couldn’t find one that was available and affordable, so I decided to create a program called Scribblers, which offered free art, creative writing and theatre classes to children,” said Munoz, a mother of four children.

Munoz didn’t want to confine the colors of creation to the walls of El Centro Inc., which housed Scribblers, she said, explaining the launch of the Latino Arts Foundation four years ago. A festival — a centerpiece of the organization’s work typically set in September — provides free booths to students and invites 20 artists to participate.

“I thought, ‘Why not step it up a little bit for the kids and create a festival where the kids can actually show off their artwork, and maybe even sell it?’” said Munoz.

Last year, the organization awarded scholarships to three students who were financially unable to pursue their passion for arts, said Munoz, who has known the struggle firsthand.

“I was one of those kids, I didn’t have the support from my own, inner circle. I absolutely wanted to be an artist so badly but I was just going down the wrong path,” she reminisced.

Click here to learn more about the Latino Arts Foundation. 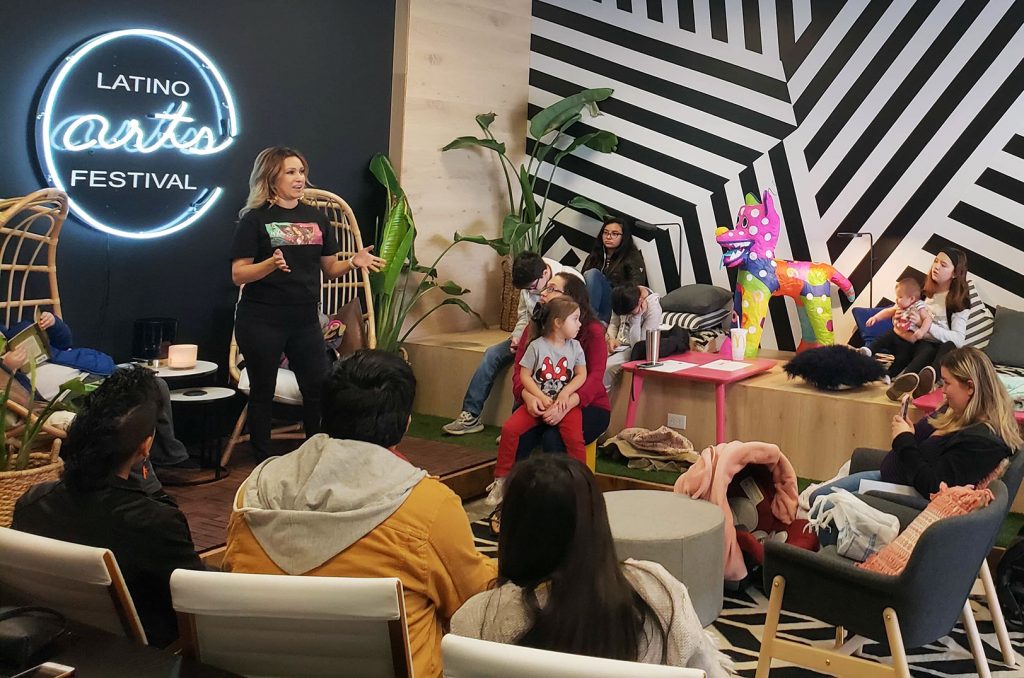 The recent “Queer Eye” episode helped jumpstart the Latino Arts Foundation by helping Munoz lease out a renovated location from city hall at a rate of $1 for the first year, she said.

“Giving me an actual space where I could actually work out of and hold the mentorship programs really opened the doors to be able to transform it into a non-profit business that could actually reach more kids than I was reaching previously,” said Munoz, whose organization has enrolled 15 youths and six mentors.

Many children engaging with the Latino Arts Foundation have struggled to obtain the most basic art supplies, she said.

“A lot of places expect people to even have a portfolio. Our kids — even the older ones — don’t have that because, honestly, they don’t even have paper. Our place provides the starting point for them,” she said.

A bright mural of a Chicano Mexican American woman with low riders in the background is painted across a wall of the space offered to the Latino Art Foundation, described Munoz.

“I feel like sometimes the Latino artists don’t always get the recognition or aren’t seen.

The name of the organization is derived from its purpose.

“We are called a ‘Latino’ foundation because that is who I am and that is the community we serve. We want to tell you about who we are and why we’re such a beautiful culture, and everything that we can give to the community,” said Munoz.

Munoz, who works full time at Hallmark Cards, said maintaining work-life balance has been the hardest part of her endeavor. Since the organization’s conception, Munoz has been trying to find sponsors, create a board and get a non-profit status. “My family and friends have been very supportive throughout. Our main priority is to provide as many workshops, mentor programs, events and art galleries that we can to our community,” she said.

Munoz comes from a family of aspiring artists who had to set aside the paintbrush and palette to make a living.

“My dad wanted to be an architect, and my mom wanted to be a fashion designer, but with how life goes, they both ended up having to quit their dreams and work,” she recalled.

So when one of her own mentees was accepted to the Kansas City Art Institute, Munoz was ecstatic, she said.

“Just watching the growth and the progress of what can happen with one child is the most fulfilling feeling,” Munoz said.