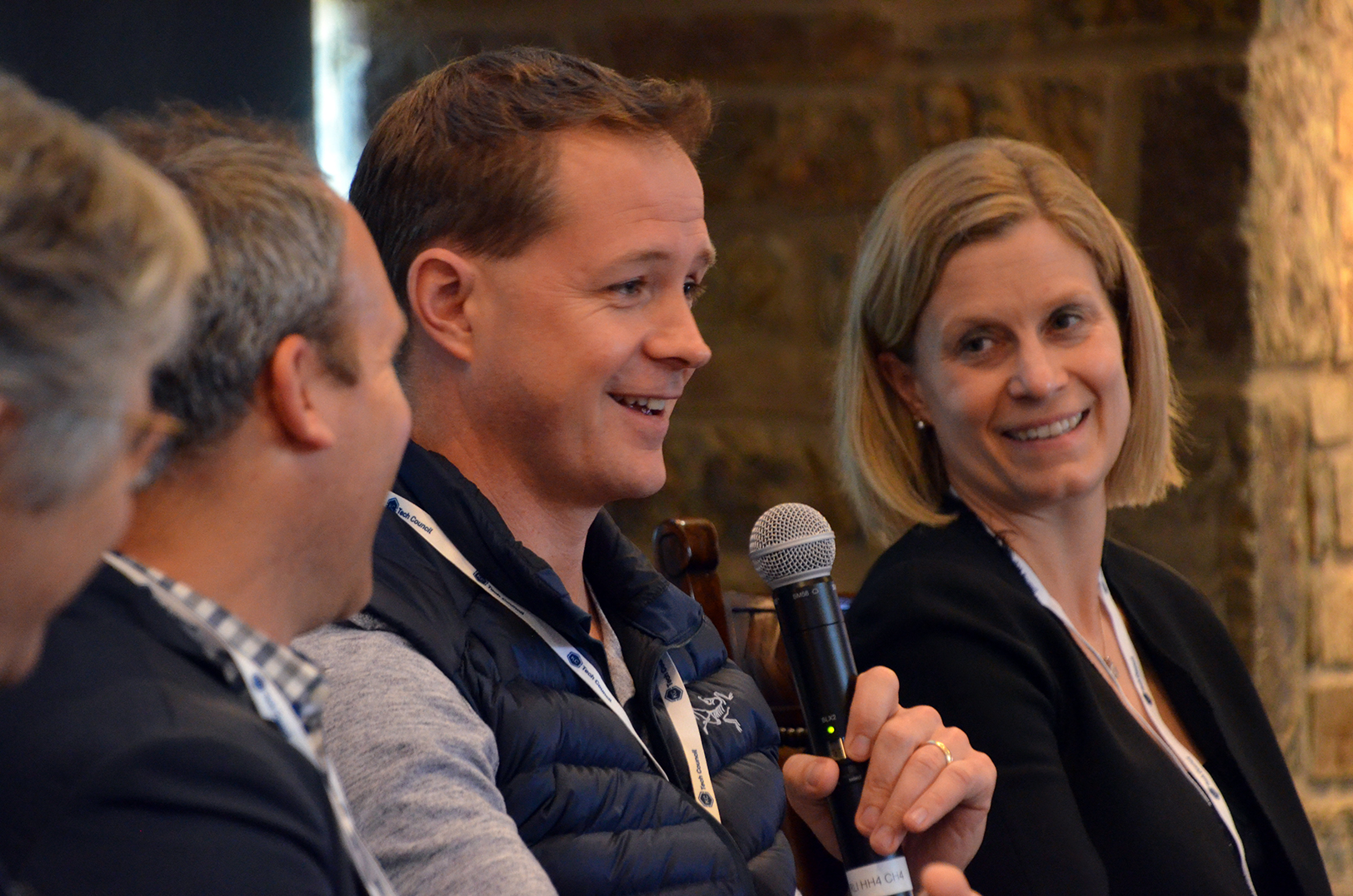 Trying to land the backing of a venture capital firm? Throw your pitch deck out the window, Chris Olsen advised a select group of Kansas City CEOs. “A lot of times founders will come and give us their pitch and they’ll start going through it and [they’re telling us] they’re profitable in 18-months. And we’ll look at them and be like, ‘Do you have another pitch?’ and they’ll say ‘What do you mean? This is the pitch my adviser told me to give,’” Olsen, co-founder and partner at Columbus-based Drive Capital, told a room of C-Suite executives and startup leaders who’d gathered Thursday in seclusion at a ranch outside the metro for the KC Tech Council’s annual CEO Retreat.

“If you’re really serious about this, you should be telling us this is a billion-dollar company,” Olsen said matter-of-factly.

Check out a photo gallery at the bottom of this story. Union Square Ventures — an investor in C2FO along with Lightspeed Venture Partners and others — has seen at least one billion-dollar exit each year, Kemper emphasized during the KC Tech Council gathering, challenging conventional thinking on “unicorns.” Click here to see Union Square’s full portfolio, as well as its exited investments, which run the gamut from Etsy and Indeed to Twitter and Zynga.

“Start over with what’s possible,” Olsen instructed the room of startup and company leaders, many of whom are searching for the keys to the perfect pitch as they look for the kinds of funding the heavyweight panel could provide, he noted.

“The mentality needs to be ‘You can do anything.’ … You can change industries! You are changing industries! Nobody’s going to believe it unless you believe it!” Olsen said.

If founders want to break the mold and attract the kind of funding that Buttrick has bestowed on leading companies like Twitter and Kohler has with Snapchat, they have to stay confident, Olsen said of Midwestern values that can slow a startups hustle.

“People in the Midwest … I think lose the encouragement. They need to understand that maybe people here don’t understand that what you’ve built is really special — that it is important on a global basis,” Olsen explained of his theory. “If you were to look around, you’d start to understand that you actually are [important], you just might not get [that reinforcement.]”

Founders should push themselves beyond landlocked stereotypes if they want to attract VC attention, the funding phenom continued.

Perhaps better thought of as “adventure” capital, VC funds are eager to take the risk, he added.

“It’s actually really hard to lose money in the Midwest — as an investor,” Olsen revealed. “… I look at our loss ratio of investments in Silicon Valley. [We would see] 50, 60 percent of the fund go to zero and it would go to zero within the first 18-months of that investment cycle.”

The reason: Startups on the coast run on high burn, either smashing through walls or into them, he explained.

“Our loss ratio on our first fund … ran out at 10 percent and I’d be surprised if it gets up to 20 percent,” Olsen said. “So we look at that and we’re like, ‘Huh! Maybe we’re not taking a risk. Maybe we need to believe in crazier ideas that are out there.’” If entrepreneurs want to play at the level of current Kansas City ecosystem giants such as C2F0 and PayIt — or legacy startups such as EyeVerify — they have to be bold, Olsen said. Closing in on his thoughts, he added that the efficiency found in the Midwest startup space could be the security blanket founders need to risk it all.

“A lot of our companies that don’t work out, the founders are able to cut the burn — if [there’s profitability] — and sell the business,” he said. “It’s not a great outcome, but it’s better than the alternative.” Olsen and his team at Drive Capital use such a line of thinking to push their founders to keep going, he added.

“We’ve got a safe landing for this,” he said. “Let’s really try and see what’s possible!”

“The market’s not adopting as fast,” Brady said. “You can [slow] your burn, survive for a couple more months, raise more capital, exit …”

Although an all-in mindest can have its pitfalls, Olsen added, taking a risk in Kansas City could provide a wealth of rewards.

Growing the startup ecosystem and increasing its output are dependent on founders rolling up their sleeves and deciding which side of the line they’re ready to ride, he said.