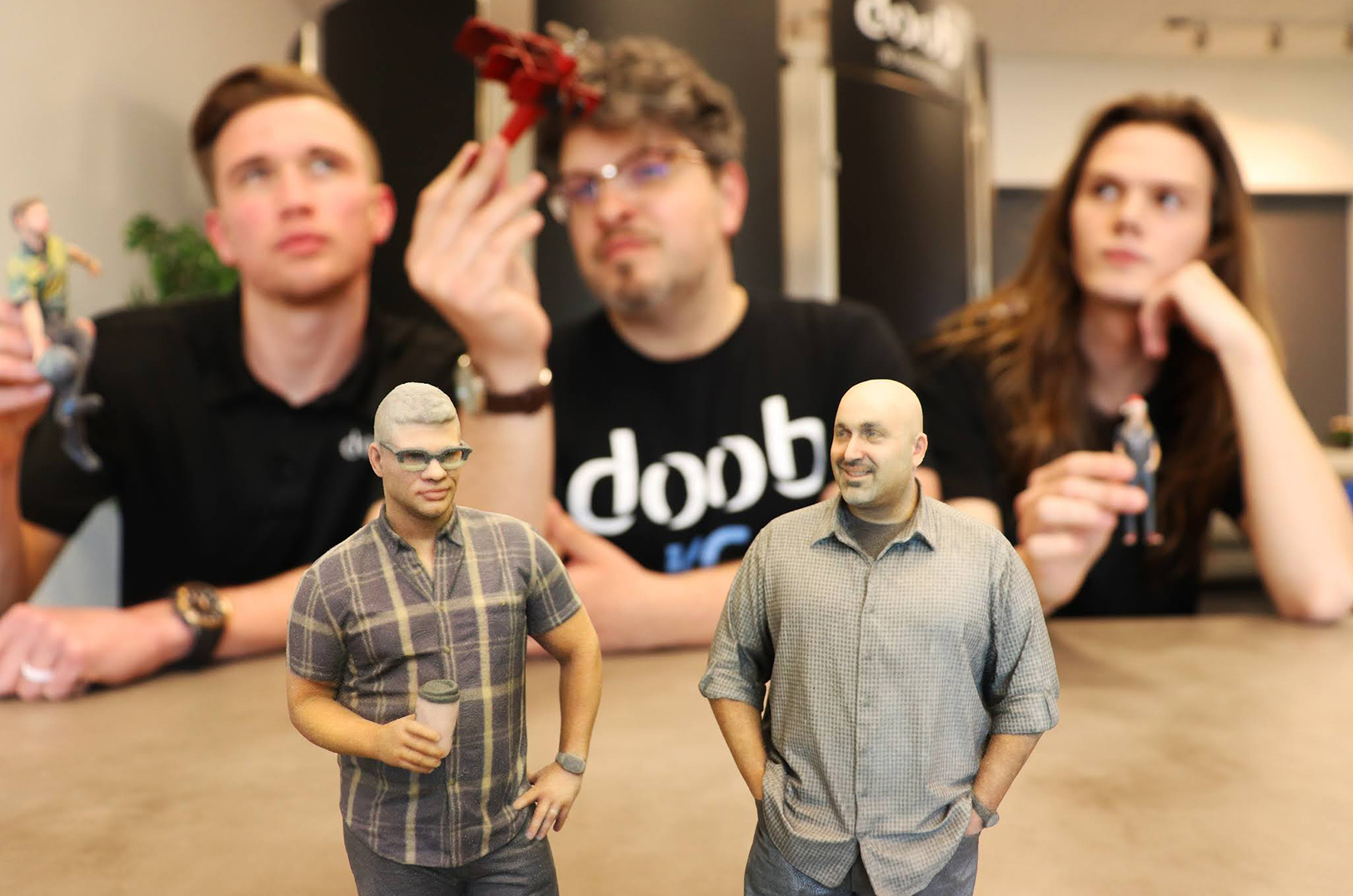 Business isn’t what it should be for a company as innovative as Doob 3D, Nick Nikkhah said openly, seated on a leather couch that looked out across the Overland Park retail store’s showroom. “People don’t know what to do with [Doob]. They’re just like, ‘Whoa, what is that?’ … It’s a new thing for me. I’ve never had to deal with a brand new company — that customers don’t know what it is,” said Nikkah, owner of Doob’s Kansas City location.

Shelves of Doobs — better understood as custom 3D-printed action figures — line the store’s walls, giving customers a glimpse at those who’ve taken the plunge and stood inside the “dooblicator” — a high-speed scanning pod outfitted with 66 cameras and nestled in a back corner of the showroom.

Slow to adopt the custom products, Kansas City consumers have shown a general lack of interest in being “doobed,” which could ultimately drive such technology out of the metro, Nikkah said.

“For us to overcome some of that is like, ‘Just come get scanned. You don’t have to buy anything!’ … Come get scanned, then 20 years later — if you want to — print it,” Nikkah said in response to the way high prices could have impacted sales throughout the course of the store’s first year of business, threatening its longevity.

Figures start at $125, with the price rising with size, Nikkah said.

A serial entrepreneur, Nikkah first saw potential in Doob and its 3D printing technology when he interacted with the German company — which has found success in New York and Los Angeles — through a friend’s Facebook post, he recalled.

His interest in such innovative technology piqued, Nikkah formed an alliance with partner Malik James to bring Doob to the Kansas City market, he said. Slow but steady, Doob’s five member team — a group that isn’t given titles upon hiring and instead works to achieve a common goal — has shifted its focus to creating a customer experience, explained Aaron Yoratovich.

“We just tried to make it more of an inviting place to spend your time while you’re getting this great product,” Yoratovich said of the process, which included bringing in complimentary snacks, beer, wine, and creating a lounge area that enables customers to enjoy the memory making process.

“[It was all about] letting people enjoy themselves a little bit,” Yoratovich added.

Personalizing the Doob experience has proven successful for client retention, but bringing customers through the store’s door — in an affluent Overland Park strip mall — remains difficult, Nikkah made clear.

In response, the team has considered moving the store to such locations as the Crossroads Arts District, the Country Club Plaza, and Oak Park Mall —  a solution none of them are exactly sold on, Nikkah said.

“This crowd is not a bad thing. I feel like it’s just — they’re more cautious on how they spend their money,” he said. Exposure is key for Doob to succeed in the metro, added team member, Fabian Conde.

As the company looks for ways to better engage the community, a passion for 3D printing technology remains at the forefront of the teams mission, Conde elaborated.

“[If I could tell customers one thing,] I’d go Schwarzenegger on their ass! ‘Come with me if you want to live!’,” he said, referencing the action star’s iconic line from “Terminator.” “It’s the future. You don’t have to be afraid about it. You should be excited!”

With an imagination running wild, the possibilities of 3D printing are endless, Nikkah stressed, adding that to fully embrace it in Kansas City could be the key to making the city the most entrepreneurial community in America.

“I got one thing that it’s been kind of burning a hole in my mind. As we continue to shift away from certain industries, right? As manufacturing, energy, you know, we have people out there worried about their jobs and their careers,” he said. “This is an avenue to start looking at! To get involved with the new technology, could be to set yourself up for a new life in a new career.”