A new analysis of early-stage entrepreneurship over the past 20 years indicates a more welcoming environment for fostering startups has developed in the Show Me State.

In a state-by-state breakdown released Thursday by the Ewing Marion Kauffman Foundation, Missouri outperformed Kansas across the board. Overall, Missouri’s scores showed climbing measures of entrepreneurship, while Kansas saw activity on the decline. Click here for an interactive data table detailing the findings across all 50 states.

The report takes into account four key indicators that track changes in entrepreneurial activity over time (1996-2017), across geographies, and among various demographics. The indicators include: Missouri topped Kansas on all four indicators, though the neighboring states were the least dissimilar on the rate of new entrepreneurs — 0.32 percent compared to 0.30 percent.

On opportunity share of new entrepreneurs, nearby states Nebraska and Iowa had the highest rates in the nation with 94.03 percent and 93.98 percent respectively (compared to 88.47 for Missouri and 80.16 percent for Kansas.)

Thursday’s release also noted a slight increase in entrepreneurship nationally — a 0.68 average score using the Kauffman Early-Stage Entrepreneurship Index (the highest level recorded nationally over the past two decades). Missouri achieved a score of 1.86, compared to -1.15 for Kansas. The debut of the four Kauffman indicators marks the retirement of the Kauffman index, which emphasizes rankings over data policymakers and others could use, according to a blog by Julie Scheidegger, senior content strategist for the Kauffman Foundation.

“It gives a lot of nuance large, traditional indicators can’t always provide,” explained Sameeksha Desai, director of knowledge creation and research in entrepreneurship at the Kauffman Foundation, in Scheidegger’s blog. “It doesn’t tell you what to do, but it can help you think about what next steps to investigate.”

For example, Scheidegger said, if the indicators reveal that a state has an exceptionally high rate of new startups, but low one-year survival, the question can be raised: What can be done to better support entrepreneurs in their first year? 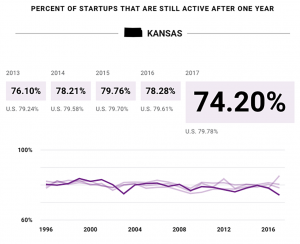 Click here for the full breakdown of the indicators, as well as the new report.

Notable findings from Thursday’s analysis include:

“While the data from the Kauffman Indicators show positive momentum in entrepreneurship, we still have a long process ahead to completely reverse a four-decade slump and repair the disruption caused by the Great Recession,” said Victor Hwang, vice president of entrepreneurship at the Kauffman Foundation. “We hope this new approach to measuring early-stage entrepreneurship will provide policy makers with the information to make practical decisions that support new business creation and early growth.”