The multimillion-dollar investment from a Saudi Arabian accelerator and capital firm is pushing WISE Power from the West Bottoms to global growth, said Kevin Williams.

“The injection will allow us to expand quickly to get this technology out to the world, which was what our original intent was with WISE Power,” said Williams, founder of the IoT and energy storage firm. The term sheet agreement of a capital injection of up to $3 million from SilverNote Investment Capital — at an evaluation of up to $10 million— has fueled partnerships in Nigeria, Japan, Saudi Arabia and the United Arab Emirates, as well as the opening of four offices in India, he said.

“We sold a successful company [WillCo Technologies] because we felt that we had a calling to spread this technology that could benefit many others by providing electricity — one of the things that we take for granted,” Williams added. “This injection will allow us to get this into areas that don’t normally even have electricity.”

The sale of WillCo Technologies, a company providing a cybersecurity workforce compliance program for the U.S. Department of Defense, was an effort to concentrate heavily on the growth of WISE Power, said Williams.

WISE, now in the midst of a capital raise campaign, began by reaching out to other startups and returning to its pitch deck, he added, noting recent global recognition stemmed, in part, from the firm’s uptick in social media presence.

“We felt like in this go-around, we needed to raise the capital necessary to go to market, not only quickly, but with all of the resources and timing that we needed,” he said. “It’s one thing to do research and development, and as we’ve made money each month we’ve put it into certain things, but now we need to make a sustained and coordinated effort to go to market. 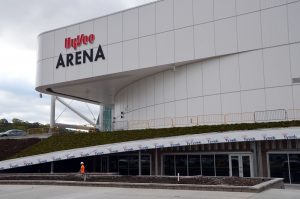 A new relationship with Hy-Vee Arena in Kansas City’s West Bottoms now allows potential investors and distributors to tour the WISE Power lounge demonstration site, which has contributed to the company’s partnership growth, said Williams. WISE Power soon will officially move its office from Overland Park to the former Kemper Arena, which is being redeveloped into a sprawling sports complex and will be powered by WISE, he added.

“A gentleman traveled 21 hours to come and see it,” Williams said. “Having Hy-Vee Arena as our demonstration site is paying off.”

“We decided that we were not going to sit here and try to sell this to the world ourselves, rather we bear this technology through a business model through other businesses, so that they would add new products and services to our other existing customers, and to be able to go out and sell to new customers,” said Williams. “Our recent activities have just validated that business model.”