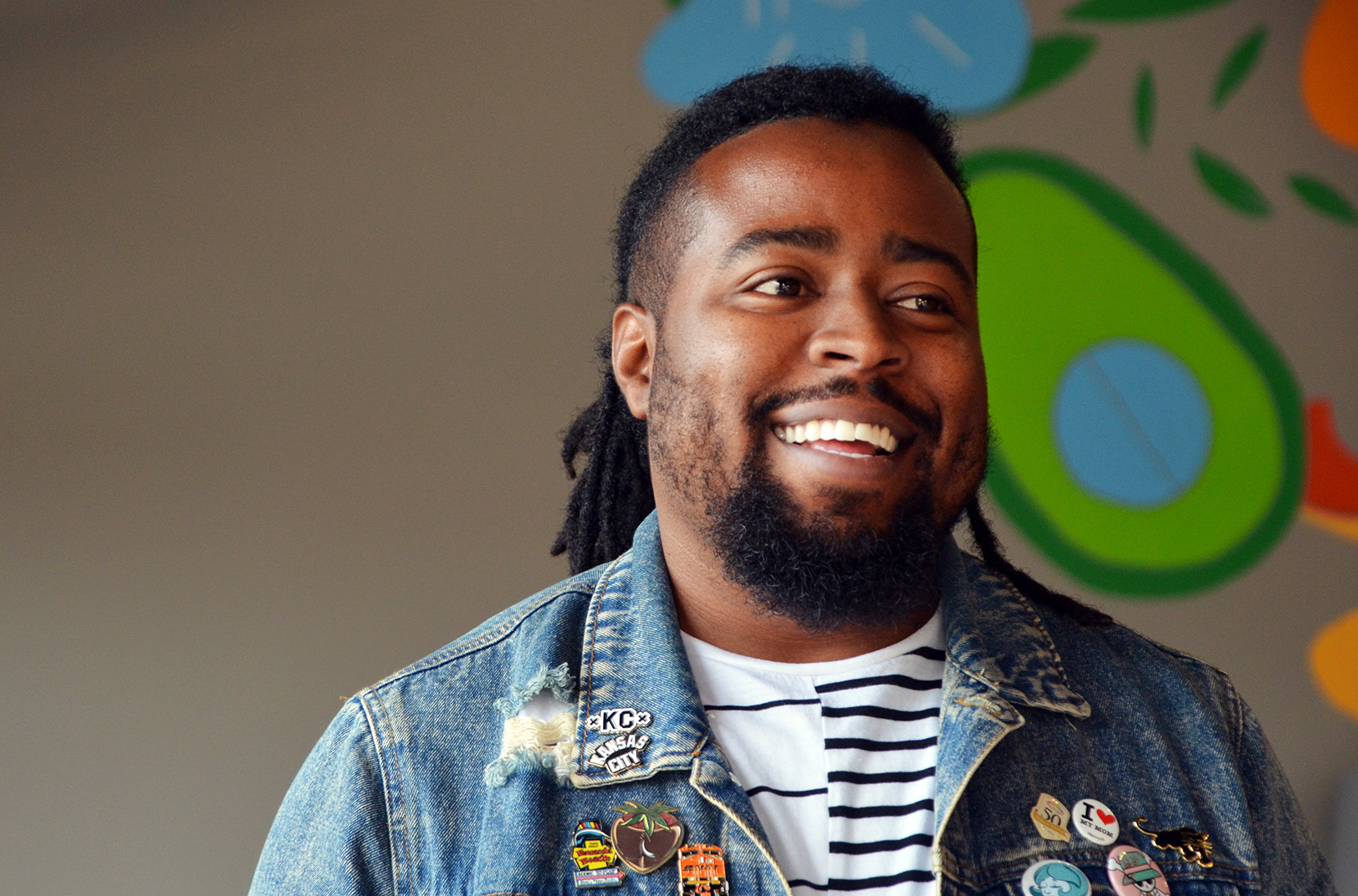 Royce “Sauce” Handy wears his influences and inspiration like pins on the outside of his well-worn jean jacket.

The KCK-born hip hop entrepreneur embraces his identity: A collector of Goosebumps books. A student of history. A fan of 1990s family sitcoms. His lips twist into a smile and his eyes brighten as he raps in “Childhood Crush” about the African American character Lisa Turtle from the largely-white teen TV show “Saved By The Bell.” But seated just inside Ruby Jean’s Kitchen & Juicery on a warm, sunny September afternoon, Sauce is more contemplative as he glances out a window across Troost Avenue.

“Why are Northeast Wyandotte [County] and East Kansas City impoverished while the areas around them are flourishing? Why has it been like that historically? How long has it been going on?” Sauce asks somewhat rhetorically.

An urban studies student focusing on community organization and black studies at the University of Missouri-Kansas City, he already knows the answers.

“You come across names like [famed Kansas City developer] J.C. Nichols, racial covenants in real estate, the Troost wall. You might hear whispers about some of these things — it’s getting more popular to talk about now — but we really don’t know what it means until we study in detail,” Sauce adds. “People like me can translate it through hip hop, so it’s not so much of an academic thing. Our history needs to be accessible to regular, everyday people.”

His latest album — “Soul Food 4: A Dedication to Black Men,” dropping Nov. 22 — explores issues of race, but also delves into mental health concerns related to military service and poverty, relationships between black men and women, and the cycle of poverty to prison, he said.

Topics like housing, gentrification, food desserts, jobs and transportation challenges continue to plague the black community, Sauce said, and he’s uniquely suited to bring a voice to them.

“Hip hop MCs have continued the traditions of blues, jazz, gospel, negro spirituals — a protest form of music always has been the foundation,” he said. “These things are relevant today. It’s not just, ‘Oh, J.C. Nichols set us up for failure forever.’ He did change the landscape of Kansas City and its potential for what could have been, but we have to deal with these issues today. Now.”

Keep reading below the clip.

More than a pencil, pad and some beats

After making music for about a decade, it wasn’t until the past two years that Handy began to find his footing as a hip hop entrepreneur, he said.

Song-writing turned to community activism, which led to blogging and writing raps and jingles for clients. He worked for the UMKC student newspaper. He experimented with hip hop workshops for kids.

“It was really rough. My grades were slipping,” he said. “I’m doing shows, I’m rapping, I’m actually making really good stuff, traveling out of town, developing this educational program, writing and editing for the UMKC newspaper … I had to try to figure out how to consolidate all of those things into one brand.”

“Sauce” was the right vehicle, he said.

“Now I’m more specialized, and it’s like, ‘OK, Washburn University wants me to come out, what do they want me to do?’ It’s not just random, but I still have options,” he said. “I can rap. I can perform. I can teach a workshop. It’s a package that can be offered on multiple levels with that hip hop base.” Royce Handy and Kartez Addison, We Are RAP, 1 Million Cups

Partnered with Kartez Addison, who performs as Kartez Marcel, Sauce helped form the We Are RAP program, which provides training to teenagers on all aspects of business within the hip hop music industry. The duo presented earlier this year at 1 Million Cups Kansas City, and regularly performs together.

“When we met, he was more on the technological side because he had all the equipment from being a sound engineer,” Sauce said. “All I had was a pencil, a pad and some beats. He’d play the music and we’d rap and perform.”

Heavily influenced by Roy Scott of H3 Enterprises (Healthy Hip Hop), who they count as a mentor, the duo are delving into ways technology can help them scale, Sauce said.

“I’ve figured out a lane for myself in Kansas City, and I’ve started meeting with people who can help me connect the dots,” he said. “I don’t have to just jump around on stage. I can do something educational. I can write a jingle. I’m ready to put it all together and just blossom.” ‘This is not a gimmick’

At 32, Sauce says aging has helped him create a more complex storytelling arsenal, as well as opened his mind to opportunities for collaboration and funding.

“The content that I have is a little bit more family friendly — content the city can get behind and promote versus hip hop that’s explicit,” he said. “Being able to speak about social justice issues through art is a big deal for me. I’m having to make a lane for hip hop in the art community. It’s not really there yet. I was the only rapper to participate in the KC Streetcar Series.” Sauce recently performed and served on a panel at Startland’s Innovation Exchange on Artists as Innovators and Entrepreneurs, and is set to bring his brand of art to the rooftop of Big Brothers Big Sisters of Greater Kansas City Friday during Startup Crawl.

“A lot of hip hop artists don’t know about the opportunities or have access to resources to know what’s going on downtown or know who’s giving grants,” he said. “I’ve learned in Kansas City … it’s not like New York or California — you can’t do just one thing. You have to be multi-layered to figure out the Kansas City economy.”

The secret to his Sauce?

That means not holding back, Sauce said. While he structures performances based on the venue and anticipated audience, he won’t shy away from controversial topics.

“I’ve had some people tell me, ‘Stop talking about all this black stuff — just rap,’” Sauce said. “But talking about race, faith, relationships — talking about social justice — is important to who I am. Artists are going to talk about issues in their community. That’s why hip hop was created.”

“Do I pull back from doing a song about J.C. Nichols because I’m in front of white people? Nah, I don’t do that,” he added. “A lot of white people love hip hop. They can handle it.” “Soul Food 4” gets creative in ways new to even Sauce, he said. It experiments with different styles of instruments, skits and samples, as well as themes that have evolved through the four-part series.

“This one is my perspective, growing up from a little boy, learning about hip hop, experiencing street life to redemption, marriage, fatherhood, college and all of these things that have shaped me,” Sauce said.

The artist digs deep into warnings about the traps of street life, the pros and cons of capitalism and the idea of police abolition, he said. But it comes from a place of conversation, not anger, Sauce said.

“A lot of hip hop is really aggressive, overly masculine, just extra,” he said. “And I wanted to do something really different on this one.”

So what’s the same? The album drops on a family-focused holiday.

“My Soul Food series always comes out on Thanksgiving because they go hand-in-hand,” Sauce said. “I say, ‘It’s Thanksgiving. Nobody’s doing nothing. Play the album while you’re cooking. Take a video of what you think about it.’ I try to make it really personal. That’s why my dedications are so specific.”

He also crafts food as a metaphor for music, he said.

“You turn on the radio, it’s like fast food. It can’t really fill you up, but it might give you a little bit of energy,” Sauce explained. “With soul food and hip hop, you’ve got to listen, dissect it, relax to it, and let it feed your soul.”