In 2006, Joni Cobb was busy coaxing Kansas business executives to apply for a program honing their leadership skills.

Then a state-subsidized program, Pipeline would cultivate promising entrepreneurs that would tangentially grow the Sunflower State’s economy with their firms. Extolled as rigorous, the Pipeline sales pitch hit snags with its intensiveness and novelty. Skeptical entrepreneurs perceived it as an encumbrance, not an asset.

“You’ve got to be vulnerable to get something out of it. It’s a leap of faith.” – Maria Flynn, CEO of Orbis Biosciences

“They tried to get me to join Pipeline several times,” said Jay Humbard, CEO of Control Vision and a member of the first Pipeline class in 2007. “I sort of blew them off. I had a product that was going crazy and I was incredibly busy. For the first few classes they didn’t have the reputation and they really needed that.”

Freshly removed from her successful consultancy business, Cobb and Pipeline yearned for validation. Her vision for Pipeline was not simply leadership development, but also to create an ecosystem that encourages friendship and cooperation.

But to do that, Cobb needed members’ trust. She needed them to take a leap of faith — to believe that fellows’ successes along the way would propel Pipeline’s network forward. “We need someone to make a $100 million exit,” Cobb recalled saying when launching Pipeline. “I was seeing exits all over the country, so I was thinking that $100 million was reasonable. I was starting with the lower threshold.”

That prophet-like request for Pipeline — now an independent, non-profit organization that’s expanded to Kansas, Missouri and Nebraska — was recently granted. EyeVerify CEO and 10-year Pipeline alum Toby Rush recently sold his biometrics firm for more than $100 million, marking the second firm he’s sold while a member of the organization.

While Rush is a prime example of how Pipeline’s made a significant economic impact, the organization’s sustained success never depended on one catalytic event. As scores of Pipeline applicants each year can attest, it’s a trusted family network of now more than 100 entrepreneurs that makes Pipeline powerful.

“I knew I needed to give back and help grow this ecosystem that’s absolutely flourishing.” – SoftVu CEO Tim Donnelly

It’s a family that in 10 years has generated more than $390 million in wages and created 1,025 new jobs. It’s one that in 2015 alone raised $74.9 million in capital and paid its employees an average annual salary of nearly $66,000. It’s also a clan that often re-distributes its prosperity with 25 percent of alumni serving as active angel investors and 30 are repeat founders.

That success seems to feed itself by captivating members, compelling them to be engaged in the network. SoftVu CEO Tim Donnelly, a 2007 Pipeline alum, said that it was around 2011 when he contracted the Pipeline bug.

“Once I realized we had momentum, I knew I had to commit,” Donnelly recalled while enjoying the craic in Dublin. “I knew I needed to give back and help grow this ecosystem that’s absolutely flourishing.” 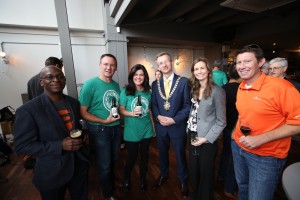 “Pipeline is all about building relationships with others and building a network,” Tatge said in Dublin during a celebration of Pipeline’s 10-year anniversary and first international module. “This trip to Ireland has been very important for us to build a network outside of the U.S. to expand it. We started in Kansas. Then we added Missouri and then Nebraska and now the network is starting to explode.”

Pipeline is also growing its network with national advisers like Laura Kilcrease, the founder and managing director of Triton Ventures, a venture capital fund in Austin, Texas. A native of Northern Ireland, Kilcrease said she believes some of her counterparts in Northern Ireland may adopt some practices from Pipeline’s network-oriented model.

“I love the fact that it’s a family,” Kilcrease said. “The idea of mentorship for young and not so young entrepreneurs is fantastic — there are no age restrictions. … And there’s almost an assumption that, once you’re in Pipeline, you’re in it for life.”

Although shared business insight is core to its ethos, Pipeline’s empathetic and practical spirit is what makes the connections enduring, said Maria Flynn, CEO of Orbis Biosciences and an eight-year Pipeline alumna. That sentiment was captured in a Claddagh, or a traditional Irish ring, that Pipeline commissioned for its 10-year anniversary. “Liem le cairde” — or “Leap with friends” in Gaelic — is engraved on a heart in the center of the silver brooch.

“We’re always welcoming new people in, shepherding them and putting an arm around them,” Flynn said during a celebration in Dublin, Ireland, on Friday. “You’ve got to be vulnerable to get something out of it. It’s a leap of faith with your business but it’s also a leap with each other.” Though she’s pleased with its success thus far, Pipeline’s entrepreneur-in-chief shows no sign of curbing the group’s “big dream” mentality. In fact, Cobb said that as more Pipeline fellows experience success, her expectations and aspirations grow.

“Now having an over $100 million exit, I’m turning to some of the entrepreneurs that I know are building really significant companies and say ‘I’m thinking $250 or $500 million,’” she said. “They just smile.”

In reflecting on her own leap of faith of leaving a comfortable job to start and maintain Pipeline through tribulations with politics, funding and the broader economy, Cobb knew her family was there. Fellows reciprocated her own encouragement to take risks and trust in others. And it’s a leap that’s paid off not only for the organization but the regional economy.

“There were intermittent leaps of faith that made this job really difficult — I had people in my family that were worried about my health,” Cobb said. “But it was the entrepreneurs that were so passionate about Pipeline and they always had my back. It’s so much easier to take a leap of faith with friends.”

For more of Startland’s coverage on Pipeline’s visit to Ireland, check out a few of these stories:

The Pipeline fellowship’s journey to the Emerald Isle in photos
Parallels emerge between Midwest, Belfast entrepreneurs
Reporting from Ireland: A pint with Pipeline fellow Jeff Rohr