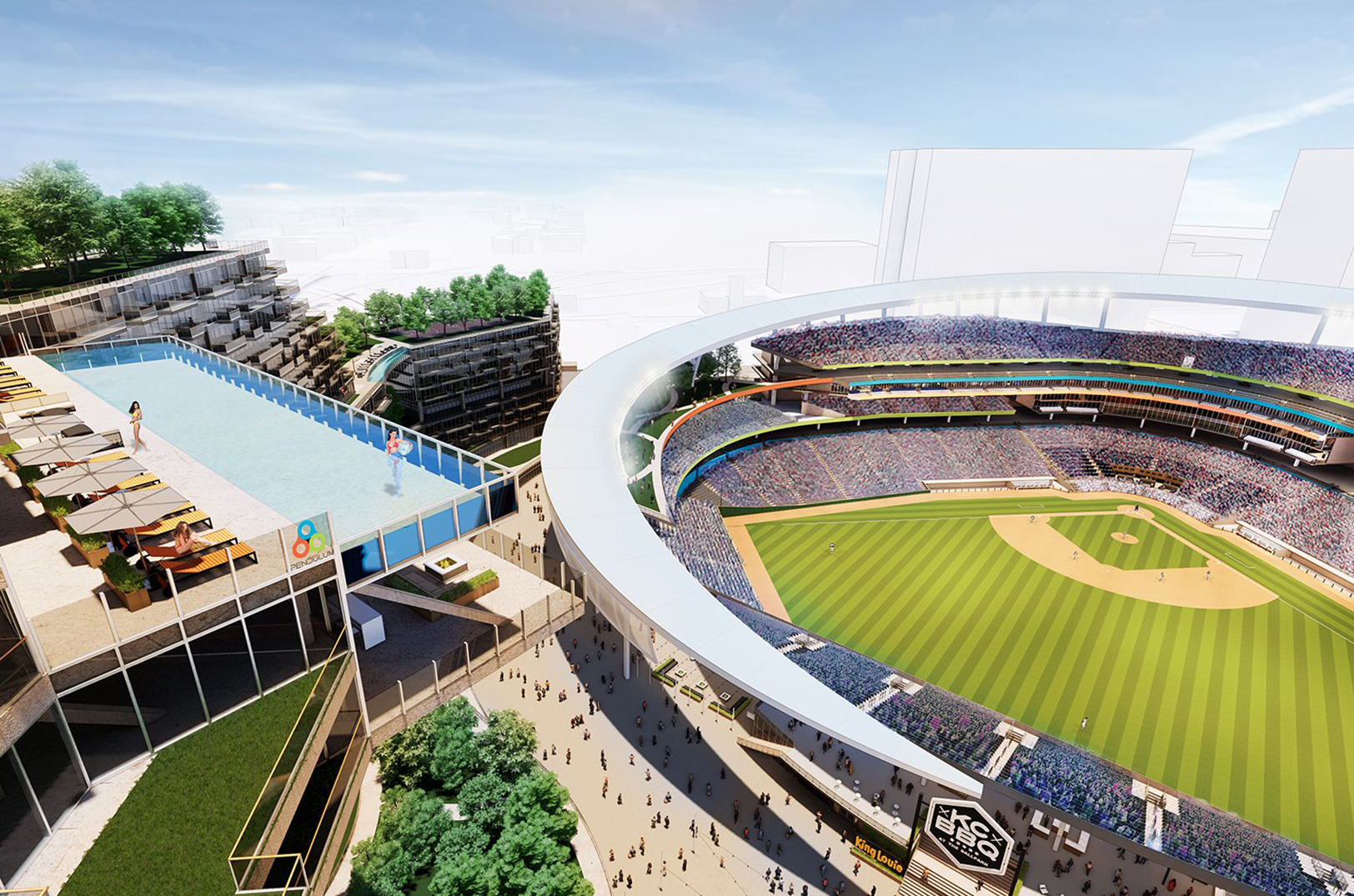 Architecture is more than design — it’s a business, the founder of Pendulum said: the business of balancing what’s possible with what actually works.

When Jonathan O’Neil Cole and his team at Pendulum Studio released concepts in July 2020 for a potential — and long-talked-about — downtown stadium for the Kansas City Royals baseball team, the award-winning architect didn’t necessarily think the designs would ever come to fruition in the real world.

But that wasn’t the point, Cole said. The ballpark concept explored a stadium with such amenities as a sprawling Kansas City barbecue experience; a brewery with homages to Johnson County’s King Louis Lanes; high-end restaurants, lounges and a food hall incorporating a Katz Drug Store theme; a dog park; a sky pool seeming to hover over the field; and wraparound housing with views of the game.

All designed to showcase the unexpected possibilities in sport architecture, Cole said. “I think the concept we did for the Royals was amazing,” Cole said. “It took a lot of guts to be vulnerable and put ourselves out there for all of the good and bad to be said about it. But, it did exactly what we wanted to do, which was start a conversation about what could be. We didn’t get paid for that — nobody asked us to do it.”

The passion project — with meaning beyond the obvious public interest and excitement around relocating the hometown team — was one worthy of what Cole called the birthplace of sports architecture.

“For the most part, all of the major sports architecture firms are here in Kansas City or have ties to Kansas City; that’s what really brought me here,” the founding principal at Pendulum Studio and California native said.

Scroll down or keep reading to see a virtual experience exploring Pendulum’s concept for the downtown Royals ballpark.

Stepping to the plate

Starting his career as an architect for HNTB Corporation — “the granddaddy” of all sports architecture firms, according to Cole — he found himself working on the massive Oakland Coliseum renovation project in the mid-1990s after his boss couldn’t be there because of a newborn baby. “I was young and looking for opportunities, so there was no reason for me not to go,” Cole recalled. “I worked on-site for the Coliseum project for a year, and then we also got the Oakland arena project. Then, I moved to Kansas City.”

Since his big move, Cole also worked for HOK and 360 Architecture Inc. before founding Pendulum in 2007 in the Crossroads Art District. Taking advice from his late-mentor, Hank Stickney, Cole knew he wanted to break away from the traditional model of sports architecture and improve it, he shared.

“Architects start out thinking all about design, but what they miss is that architecture is a business,” Cole noted. “A lot of times architects want to design something that looks cool, but then where that fails is it doesn’t really meet the needs of the operator.

“What [Stickney] taught me was how to look at what I was doing and translate it into a way that people who operate facilities would understand and embrace,” he continued — noting that this approach has positively impacted how he communicates with his clients.

“… Every architect wants to say that they’re creative, innovative and different. But the best compliment I’ve ever received is that, ‘A lot of other firms say these things, but you show us these things.” Pendulum designs for various types of projects — both sports and non-sports — but the niche where the architecture firm and Cole shine: baseball parks. “I’m really excited about what [the FUSE Multi-Use Complex] is going to do for Gastonia, [North Carolina],” Cole said. “Gastonia has this really cool small-town, vintage feel to it with its storefronts and beautiful brickwork. And now they’ve got new culinary [facilities] and a hotel coming, in addition to our multi-sport facility.”

Aside from sports, Pendulum has designed concepts for apartment renovations, restaurant patios and was recently selected to tackle the massive Troost Village Development — which includes renovating four historic buildings and two others, Cole noted.

Click here to read more about Pendulum’s work on the Troost Village Development.

Pendulum’s success also has earned it two international design awards in 2020 with Rethinking the Future, as well the Sports Business Journal 2020 Power Player award for Cole.

“For national folks to think enough of me and enough of my firm to be worthy of that recognition is a big deal. I’m really humbled by that,” Cole shared. “It tells me we’re doing good work, and we’ve got to continue to do great work. And it’s not just me — I feel the whole firm deserves recognition for that.”

Grand slam on tech and culture

All of Pendulum’s projects are rendered into virtual experiences, Cole said, noting the importance of embracing technology to showcase designs like the downtown Royals stadium. “What I found is: I can see where I want to go with something without having to draw it. But a lot of times with my clients, they can’t see it until we get it built — [they’re] having to take a huge risk,” Cole explained. “By us pushing the virtual and visualization element as part of our design methodology, it serves as a tool to help them see it before it happens.

“We’ve even invested in 3D scanning capabilities that we’re integrating into our projects,” he continued. “Now, you can put the goggles on and walk around these facilities as if you were there.”

Along with technology, Pendulum is innovating toward becoming more of a lifestyle brand versus simply an architectural services provider, Cole said.

“That’s what we’re after — taking influences from music, culture, fashion, design, from all these things and combining them in a curated way that makes people relate to them in a very authentic manner,” he shared. “We want to create energy and spaces that people step into and immediately think, ‘This is cool.’”