Michele and Johnny Dawbarn’s symbiotic studio space in the Crossroads allows the always-evolving creative duo to do more than finish each other’s sentences. It stitches ideas to passion, threading a common mission through their businesses, they said.

“When you sew-” Johnny began.

“You bring two things together,” finished Michele, co-founder of SewKC with her husband. “We work with the community to create these products. We source locally as much as we can, and are proud to bring partners into our mission.”

Click here to read more about the cafe’s plan to bring HITIDES Coffee, SNOASIS Ice Cream and Donutology to the space.

All three Dawbarn concepts are built on a foundation of collaboration, Johnny said. Projects range from special edition caps in partnership with Made in Kansas City to custom skateboards for MADE MOBB and even Startland News’ trophies for Startups to Watch honorees.

“We say, ‘You plus us is what makes this great,’” he said. “It’s not about any individual by themselves; it’s about doing it together.”

As sewing machines hummed in the background, mask-wearing customers popped in the front door of the Crossroads shop — occasionally calling the Dawbarns’ by name — hoping to get a glimpse of the behind-the-scenes action on display daily in the studio. With T-shirts, hoodies, caps, baby bibs, burp cloths and even face masks for sale online — as well as products sold across the city at such retailers as the Made in KC Marketplaces, Mid Coast Modern, Westside Storey and Junk Drawer Studio — SewKC seems like a well-oiled machine for good reason, Michele said.

“We paid our dues,” she chuckled, the duo reflecting on the years leading up to SewKC’s launch.

“People make snap judgments; like they say, ‘You guys came out of nowhere’ or ‘Are you trust fund kids?’ We’ve gotten zero money from our families; it’s all been organic,” Johnny added, noting the Crossroads storefront followed an entrepreneurial journey that saw the couple first selling to friends and family by word of mouth before opening up their home basement for trunk shows of their former “Squeaks and Beeps” kids clothing brand.

“Believe me, there were times when I had to jump up and put on clothes because a steady stream of women were coming into my house for a trunk show I didn’t know about,” he continued. “But when you’re in those early days, there’s no visibility of what you’re going through, what you’re putting in, outside of your social circle.”

Michele hadn’t always been interested in sewing, she said. After learning the trade from her grandmother, it went mostly unused until the couple had their first child 15 years ago. Creating clothes for her daughter and later a son led to interest that grew quickly once people got a look at Michele’s work, the two said. “It was clear there was demand for it, so eventually we got into wholesaling to mom-and-baby boutiques,” said Johnny, who at that time worked in business development for Hallmark’s innovation incubator. “We did well with it, but as the kids got older, the demand at home wasn’t there, so Michele changed her focus. She was turned off by how much time away the retail aspect of Squeaks and Beeps was taking.”

In response, Michele leaned into staying active with their children — initially helping lead arts and crafts at school where she got to know many of their classmates, she said. Eventually, the school kids learned of her apparel background and asked for sewing lessons.

“One little girl, Jenny, just connected with me on a different level. She was really talented,” Michele recalled. “Her parents were not creative, so she didn’t really have anyone in that aspect of her life. Her parents supported and loved her; they just didn’t understand that creative streak.”

The girl’s interest didn’t falter when she was diagnosed with cancer and began receiving treatments at Children’s Mercy Hospital that led to hair loss, Michele said.

“She hated the wigs, so we started making her bandanas,” she said. “And her love of sewing just grew; she had to have a bandana to match every outfit.”

Jenny became an inspiration to Michele, she said, encouraging her to do more than teach sewing classes — and pushing her to get back into the apparel business.

“After she passed away, we started SewKC as a tribute,” Michele said, noting face masks supplied to Children’s Mercy through the company’s buy one, give one campaign feature designs in Jenny’s favorite color: yellow.

Collective Ex — a member-oriented studio environment that applies coworking concepts to creative and production processes (and counts SewKC as a keystone in its operation) — solidified itself as a concept after Johnny departed a nearly 25-year career with Hallmark. Ten years working on innovation projects — including leading a popup retail experience centered on creativity in the Mission District of San Francisco — left an impact, he said. “An idea is great, but it’s not enough,” Johnny said. “If you can’t bring an idea to life in a way that is meaningful to other people, it really is just a thought; nothing more.”

Collective Ex was, in many ways, intended to take SewKC to the next level, he added, but its meaning runs deeper.

The concept: provide a retail storefront that’s split with creative space and offers just as much of an experience to the artist as the customer.

“People are fascinated by the creative process,” Johnny said. “What we learned from the Hallmark incubator and even trade shows in Las Vegas was that people are drawn to performances — whether its magicians or bootleg superheroes on the Strip. But when you turn the experience into live art, not only are people attracted by their curiosity but they can gain understanding into what the artist does best — what they’re striving for and the principles that they abide by.”

The Dawbarns are always looking for artists-turned-members who are self-driven, difficult to satisfy, and open to working together, he added — emphasizing that collaboration isn’t just a light goal, it’s a requirement.

“The environment is not only curated, you’re expected to collaborate, but that percentage of collaboration is up to each individual,” Johnny said. “You just can’t be a squatter who works from here and does nothing with anyone. Again, it’s about stitching people together.”

Collective Ex has a social component, but is also about the transparency of the creative process — which often includes critical collisions, he added.

“We believe that when you cross paths with these great artists, especially if there’s a really uncommon pair — like a seamstress and a metalworker or a printmaker and woodworker — you start to see some really interesting ideas,” Johnny said. “We can make those ideas into reality in a space where they have all the tools at their disposal.” 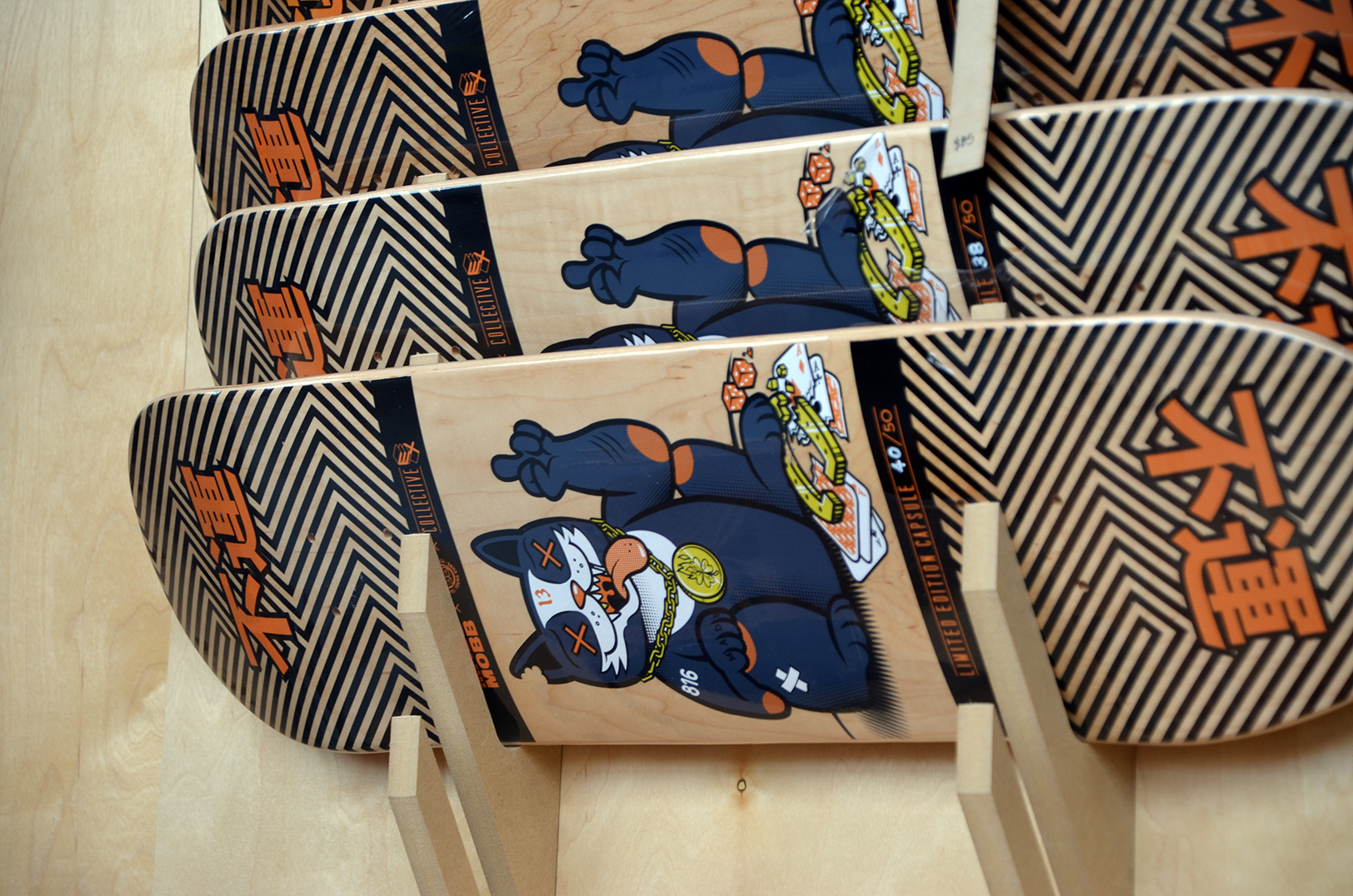 Taking the leap from hobbyist-at-home with a cult following to Crossroads creative hub required leaning on the Dawbarns’ full story — two lifetimes of experience leading to a moment just waiting to be sewn together, Johnny said.

“Rewind 10, 15, 20 years and I couldn’t have possibly forecast we’d be doing any of this,” he said. “But it’s great that we can take those chapters of our lives and apply it now.”

“We’ve had customers who have been with us for more than a decade,” Michelle continued. “Starting with the baby business, many of those kids have grown up with our brands. We’ve adapted and are still very much relatable.”

“Everything just-” Johnny began to add.